Which Jill Are You? - The Costume Blog

The Birthday Party - Part One

To alleviate the depression that comes with turning 40, my awesome friends threw me a party celebrating me! "Jill" was the theme of the party. Here's the invite: 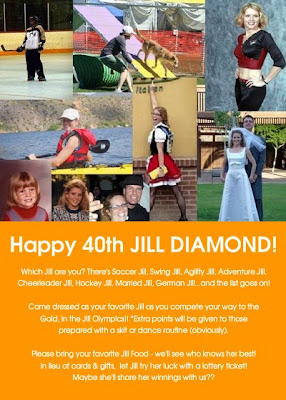 Guests were asked to dress like Jill, bring a potluck of Jill-food and compete in the Jillolympics. What a perfect party to take the sting out of turning 40. (40! Seriously. How did I get so damn old???)

The reason there are a ridiculous amount of pictures in the post is because my friends are the coolest, funniest, most creative friends EVER and I need to show that off.

Irene was the hostess of the party. She dressed as Xanadu-Jill, from the time we did the most awesome Xanadu routine at a friend's birthday party. 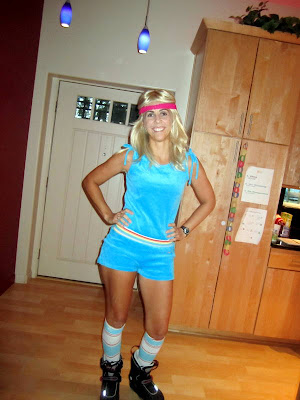 Nicole was the other hostess. She went pretty far back and reminded everyone of my failed stint as a mailman. Oy. Mailman-Jill: 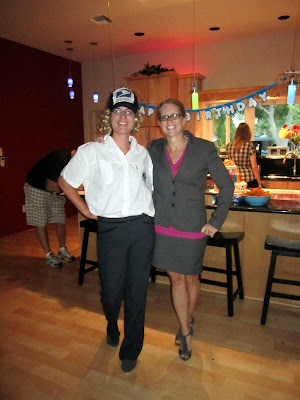 I dressed as Work-Jill because none of my friends ever see that part of my life.

Nicole's husband came as Showgirl-Jill. How hot is he?!! 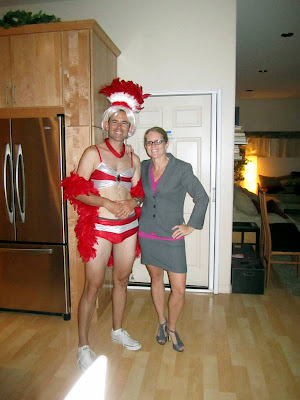 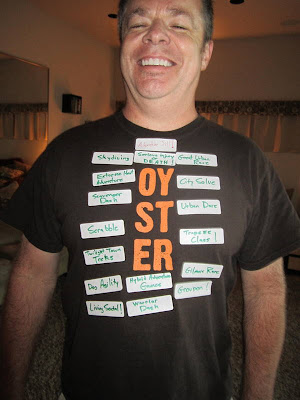 Aimee was Agility-Jill. She was hilarious during the costume parade. She did a perfect show of running her pretend dog through a course. 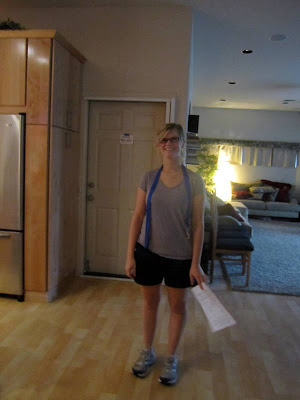 She was the one who truly looked the most like me. I rarely see her in glasses and I was shocked when I saw her to realize how much we really do look alike. 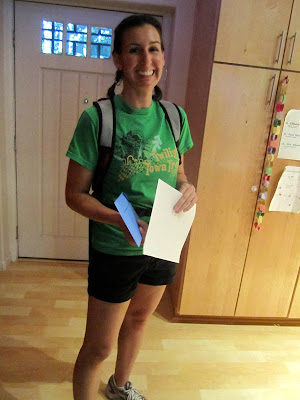 Christy came as Urban Adventure Race-Jill, wearing our last year's costume. NFBF dug through his really, really old stuff to find the Carlos O'Kelly's shirt. We met while working at Carlos 19 years ago! That hat is from 19 years ago too. 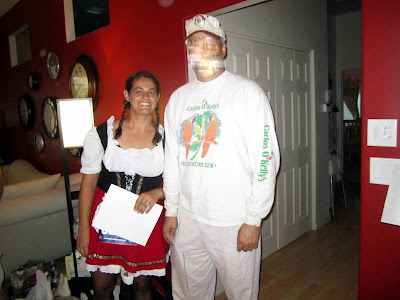 Leah was Soccer-Jill. Her costume parade antics included getting hit in the face with a ball. :) Josh came as Swing-Jill. Back in the days of swing dancing, I was known as "the bouncy one", thus the springs on his shoes. So clever! 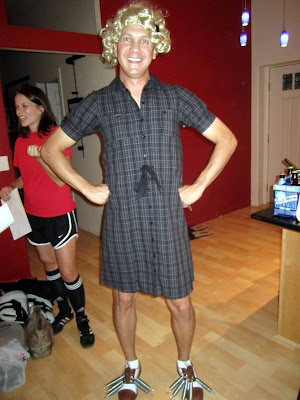 Elaine came as Swimming With the Dolphins-Jill, complete with a picture of me actually swimming with the dolphins. Her costume parade included mimicking a dolphin ride. 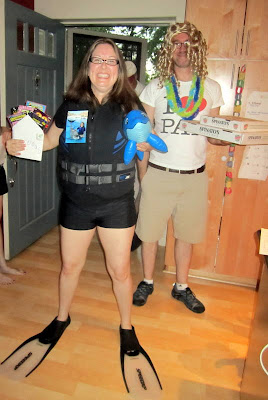 Steven and Pat were both Everyday-Jill, though I think I'm a little offended that Pat thinks my "everyday" look is a mullet pulled into a ponytail. I DO NOT have a mullet. 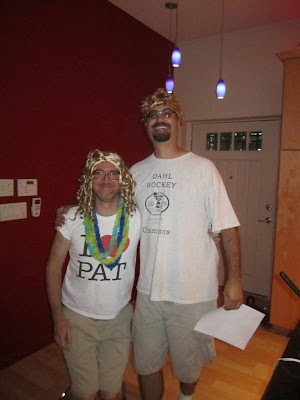 Little David is Hockey-Jill and Iren is Showgirl-Jill. David even pulled out the old swing dancer jersey that we wore back when I played roller. 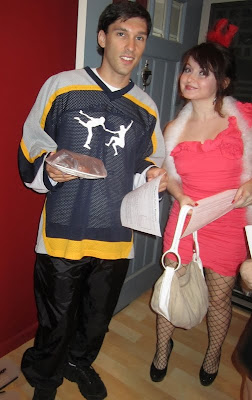 Brent. Brent. Brent. Oh so infuriating Brent. He came as 2nd Place-Jill. He looks like Urban Adventure Race-Jill in his CitySolve t-shirt: 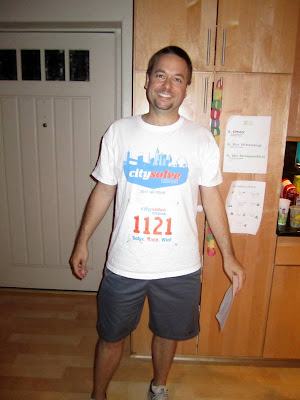 But no...he needs to rub in our 2nd place finish to his fabulous 1st place finish with this insult. 2nd Place-Jill: 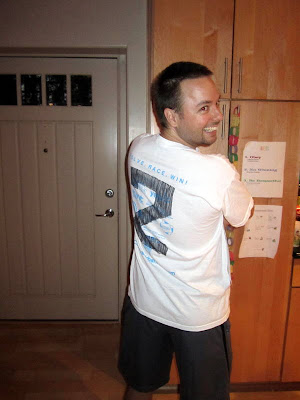 Jen came as Migraine-Jill. This is exactly how I looked when she came over to walk my dogs during that time: 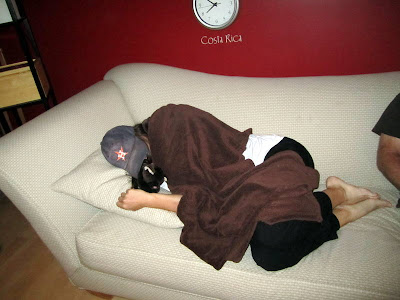 She even brought a kitty to curl up with: 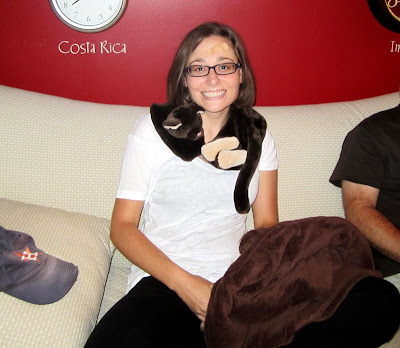 About this time, I made my first costume-change of the evening. I didn't really want to be Work-Jill all night, so my plan was to change into matching costumes with all of the guests. I brought a ton of stuff over so I could match as many people as possible. Here is matching Xanadu: 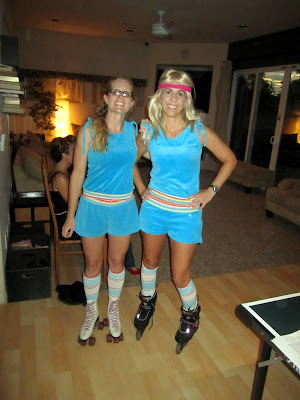 The next costume change was supposed to be matching Coyotes Pack-Jill: 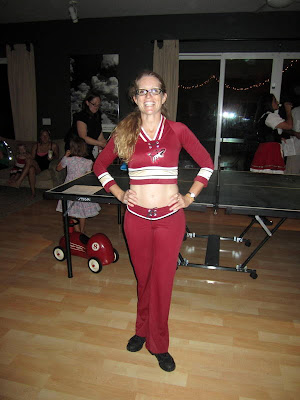 ...but Marin chickened out and instead came as Book Club-Jill. She and her husband have their library cards pinned to their shirts and books in their pockets: 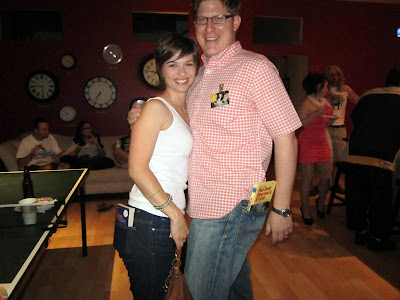 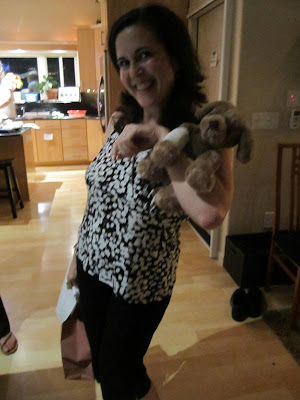 Karissa was Hit In the Face (again!) with a Soccer Ball and Have the Scar to Prove It-Jill. It looked so real, but it was just make-up! 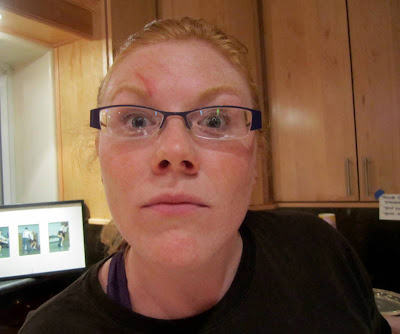 Kiri pulled off a really fun version of Bikini-Jill: 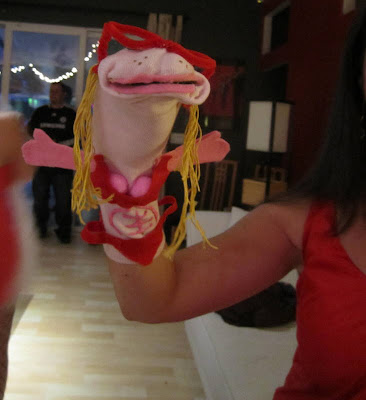 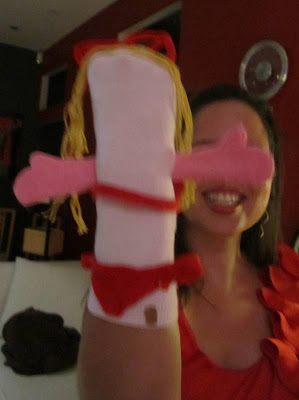 Seriously, do I have the MOST awesome and creative friends you've ever seen? Yes, yes I do!

Stay tuned for the second part of the Birthday Party posts where you will see pictures of the greatest cake ever!

OMG, Jill! I wish I was part of your crowd! What a fabulous way to celebrate the dawning of a new era. When you turn 50, I'd like to come as Hot Flash Jill.

All the best to you,
Mary