This is the dichotomy of my personality. One half spontaneous, one half procrastinative.

Spontaneous Me
Last Tuesday Patrick found out that Chivas de Guadalajara was playing MLS's New York Red Bulls at the Cardinals Stadium the next night. (Publicity for this event was non-existent, but I won't go off on a rant about that right now. Well, ok - maybe a little one: How much effort would it take for the promoters to contact the 4 or 5 soccer venues in the Phoenix area? A flyer, an email, a phone call? How about youth soccer organizations? It's not a far stretch to imagine that people who pay to play soccer might also pay to watch professional soccer. Ergh. Okay - back to the original topic.) Pat called me at noon to see if I could look into getting tickets for us and his friend from work.

The game was posted on the Stadium's website and you could

buy tickets online via TicketMaster. In my opinion, TicketMaster is the spawn of Satan. Ticket prices are usually reasonable to begin with, but then you have to pay a TicketMaster fee, an administrative fee, a delivery fee (even if you're using will call), a processing fee, a resident fee, a supplemental fee, a contingency fee, a flat fee, a retainer fee, a referral fee, a club fee, a team fee, and a membership fee, and in the end your ticket price has almost doubled. I called the stadium and found out that group tickets could be bought over the phone for a discounted price and NO fees. Yippee! Now I just needed to get 15 people together.

I started at 2:00 pm and by 10:00 am the following day, I had compiled a group of 20! What a fabulous group of spontaneous soccer-loving friends I have! Or maybe I just know a bunch of people with no social life. Either way, I love it when an idea comes together so quickly. Everyone showed up for the game and everyone paid me. I have to admit to being surprised - I expected some flakers and some moochers.

Procrastinative Me
I've been meaning to post about the game for a week now. Let's see what I can remember...

The game was really fun. The stadium's lower level was only about 1/3 full, which is quite a difference from the sold-out Mexico v. USA game last year. (I'm not the only one bothered by the lack of publicity. This is a comment from azcentral.com: "There was absolutely no promotion/advertising for this game. Thus, 0nly 30% of the expected sales occured. I'm not much of a marketing genius, but a frikkin lemonade stand in front of the stadium with a sign that said "FUTBOL HERE" would have been more promo than what was offered. I think there is an opening today for "promotional director" in Glendale, if you can manage a lemonade stand then the job is probably yours!")

But still, Chivas fans showed up in force. They were wearing the jerseys. They brought flags and drums. They were wearing Mexican wrestling masks, though I didn't really understand why. One of my Mexican friends, who is also a Chivas fan, had no explanation for me. His brother, who is not a Chivas fans, said it wass because they are embarrassed to be rooting for Chivas and they don't want to show their faces. My curiosity led me to google it. Apparently, since Lucha Libre (the real version of Jack Black's Nacho Libre) is so popular, Mexican soccer players started donning the masks when they were celebrating goals - one player had his mask in his shorts for the whole game and pulled it out when he scored. He must have been watching lots of American football players celebrating touchdowns and needed to try to match the idiocy. The practice has now been banned by FIFA, but the fans have carried it on.

The New York Red Bulls won 2-0. I don't think this was because they were the better team, but more because Chivas didn't even show up. Chivas gave up on every 50-50 ball, they barely ran at all and only had one shot on goal all game. 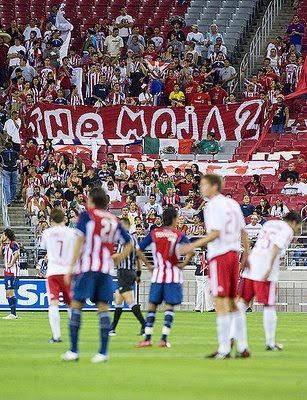 This did not matter to the Chivas fans in the section next to us. They had huge banners and signs. They cheered and chanted and danced and banged their drums for the whole game. The chants had choreographed moves - for the first part they'd wave their arms, then they'd jump in place, then back to the arms. Honestly, they never stopped. I'm pretty sure that they were so sore the next day that they had to stay in bed. Even when their team was down by 2 and there was only a minute left in the game, these people were cheering away. It appeared that the excitement of getting to see their team play was more important than their team winning. That is pretty cool.

Next up - Mexico v. Egypt or Chile on November 12th at Chase Field. Imagine how big a group we can get if I start planning now. Who's in?
Posted by Diamond Girl at 9:51 PM

Holy crap! My brother was at this game - because we talked on the phone the day after and he told me how awesome it was and that his friend wore a sombrero. He is the kid in the white shirt standing to the right of sombrero guy in this photo.