Because I am slightly crazy, I signed up to do a 12K Adventure Race with my friend, Irene. Yeah, that's about 7 1/2 miles - which is pretty damn far for a girl who can't run even 1/2 mile! (This is true - I once tried to run with Laura to the park that is 1/2 mile from my house and I could not do it.) The description of the event sounded so fun - a team of two trekking, map reading, completing mystery events and adventure tubing - that I was able to overlook the fact that I hate to run. 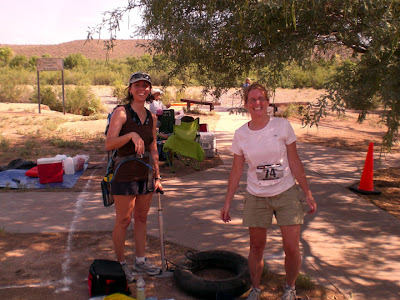 Today was the race day. The race was held out near Saguaro Lake at the Salt River, which is an hour from Central Phoenix. Since registration was at 6:30 am, it was a very early morning. If my former triathlete partner, Irene, hadn't been with me I would have left as soon as I got there. It was very intimidating and I was completely nervous that I had gotten in way over my head. I was not prepared to race for 7 1/2 miles!! But the info on the event said that even the last place team would have fun and I figured someone needed to prove that assertion. Our goal, however, was to beat at least one team - and then we'd ask them if they had fun!

The first phase of the race included five tasks that you could do in any order. Three were hiking -we were given an aerial photograph of the area with three locations marked as checkpoints. These checkpoints were not far from the event staging area and all followed trails making them easy to find, though one of them was straight up a steep hill. I don't think that this part of the race was included in the 12K. The other two tasks were the mystery events. One was to find two specific license plates in the parking lot and write down the color of their cars. For the other we each were given a Nerf golf ball and a tee and we had to balance the ball on the tee and walk to a cone and back. If the ball fell off the tee, you had to start over.

These first five tasks were relatively easy. Once completed, we had to turn our original map in for a new map. The new map was a topographical map of the 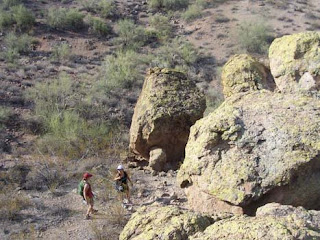 area with four checkpoints that needed to be reached in order. These checkpoints were not on trails - you had to find them using the map. Irene is a good map-reader and did a good job of getting us to the locations. Personally, I would have followed the people in front of us or aimed towards the locations where I saw people up on the mountains. Irene was having none of the lemming behavior, however. She was the navigator and she was not about to let us follow a team who might not be going to the correct location. We went up and down so many mountains I thought we would die. We walked through the scrub brush (remember, no trails here!) and scratched the hell out of our legs. Irene walked too close to a jumping cholla and a large section attached itself to her arm. I felt like such a boy scout because I had extra socks with me that we used to hold onto the cactus and nail clippers which we used to cut it off.

The first checkpoint was the most difficult. The map showed it being 1/8 of a mile from the river, but it was definitely further so we undershot it a bit. The second checkpoint was not as hard to find, but was a bit of a trek. The third checkpoint was also not too hard to find at the top of the third peak, but we chose to go straight up a ravine to save time and distance. We may have saved distance, but we did not save time. Going straight up was a rather slow, tiring process. The last checkpoint was to return to the staging area, which was down and back up and down the peaks we had already climbed. Again, I would have just followed the teams ahead of us, but Irene would have nothing of it. Irene's navigation got us to the first checkpoint better than my lemming-tendencies, but I think following the leaders to the last checkpoint would have saved us some time.

When we arrived back at the staging area, we had another mystery event. There was a course with 5 buckets, each containing a different colored rock. I was blindfolded and Irene had to stand off-course and direct me to each bucket until I had collected the 5 different rocks. We kicked ass at this challenge. Irene is very good at directions and I am very good at following. We were then given inner tubes which we had to manually inflate with the air pumps we had been 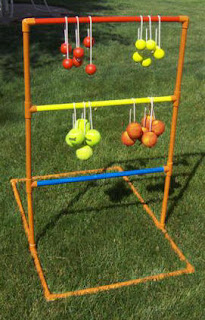 instructed to bring. We then walked (the true competitors were still running at this point) with our inflated inner tubes and our life vests a half mile or so to the last mystery event. Here one member of the team had to do a bolo toss - where you toss a piece of rope with golf balls on each end at a little ladder and try to get the balls to stick on a rung (similar to the picture here). Irene tried it first, but gave up quickly, thinking that it would take her a while. I did it 3 times before I was successful and off we went another half mile to the final checkpoint - the river!

The river was cold, but it felt soooo good at that point.

This is a picture of the area where we were on the river that I found on the internet - it's a lot more full this year than it was when this picture was taken. We tubed about a mile back to the finish line. On the way we passed two groups of wild horses. The second group had three foals. After we passed, we turned and watched them as they crossed the river. It was really cool - I wish I had my camera.

We finished the race in under three hours. The winners did it in an hour and a half, but that's okay - we weren't trying to win. We were trying to not come in last. And congratulations to us! We beat about 15 other teams!! WOO HOO! We weren't even close to last! Yippee! I really surprised myself with my stamina. I did not get overly tired and I never wanted to stop. I ran a lot more than I thought I was capable of. I was worried that I would hold Irene back but that was not the case. I definitely held my own. I am not the wuss I thought I was.

Wow! You two She-Ra's rock. I would have had to stop to go to the bathroom about 5 times and once the cactus glued itself to Irene, I'd have called it a day.

Glad you got it out of your system before Brazil! I'll have Steven teach the meaning of "leisure".

OMG!! you pulled off a cholla with your sox and saw wild horses. Amazing. way to go, adventure racer! (I promise to blog at least 3x next week.....)

Must ask, did you start the day with Ding Dongs? HA!!! Sounds like you did great though!! And you didn't finish last, so that must mean you must have had a blast!