My friend and ex-roommate, Laura, is a runner. Actually, she's a triathlete now, but this story pertains only to running so we're sticking with the "runner" label. Laura has tried for years to brainwash me into joining her cult. Two years ago when she was living with me, I agreed to try running with her. I couldn't even make it the 6/10 of mile to the park by our house. Lately, I have started to come around to her way of thinking (I can even run to the park now!) and to reward me for my newfound ability to run, she agreed to be my partner in an Urban Dare race.

The Urban Dare is part adventure race in that there are mystery events (called Dares in this race...clever how they tie that in with the title, huh?) and part scavenger hunt. We were given a list of clues to 12 locations in Scottsdale. Five of these locations involved Dares that we had to complete. The other eight required us to take a picture of ourselves in front of the specified landmark. 40 teams participated in today's race. Our #1 goal, as it always is, was to not come in last. Our secondary goal was to finish in the top half.

Some of the clues I knew right away:
"He invented the Mai Tai. Get your picture in front of the tiki in front of his place. (Answer: Trader Vic's at Hotel Valley Ho)

Some required us to call our at-home-partner, Craig, to do some internet research:
"Find the Urban Dare official near a statue by David Hovey" (Answer: David Hovey is a home builder of the Optima condo development complex north of Camelback on Scottsdale Road. There is a statue there.)

Other clues were easy to solve but still required Craig to look up the locations for us since we aren't that familiar with Scottsdale:
"Nia Vardalas wrote the screenplay for this movie and played the starring role. Get your picture at the restaurant named after the film." 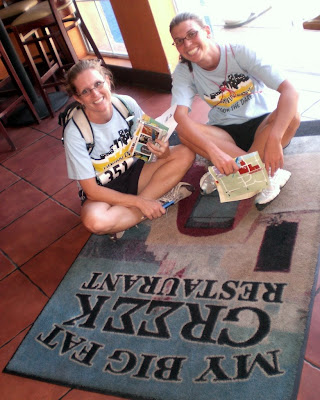 And one clue was found only by luck (and it wasn't necessarily good luck):
"He founded Scottsdale Light and Power Company and he has a street named after him. Get your picture in front of his statue. Solve the clue from #9 to find the road it is on." Now, internet research will tell you that Mort Kinsey started the SLPC. The internet will also tell you that there is a road in Scottsdale called Kinsey. However, the internet has no info on a statue of this man. The clue from #9 (unscramble NACHO DIN SOIL) told us that the statue was on Indian School. We noticed a statue (purely by chance) of a Charles Miller while running down Indian School at one point of the race. Our internet helpers could find no connection between Charles Miller and the Scottsdale Light and Power Company so we continued looking for Mort Kinsey. After searching fruitlessly for over a mile, we decided to double back to this Miller statue just to see who he was. Yep- the placard claims old Mr. Miller was the company founder. 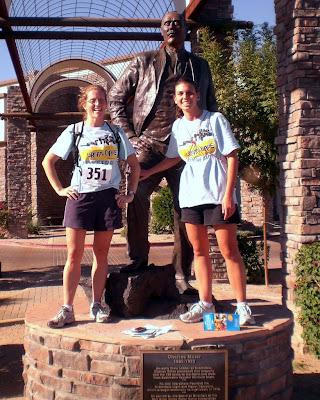 One clue required us to take five separate photos with statues of Indians. This was the easiest task of all since Indian statues are the Starbucks of Scottsdale - you can find one all four corners of every intersection. 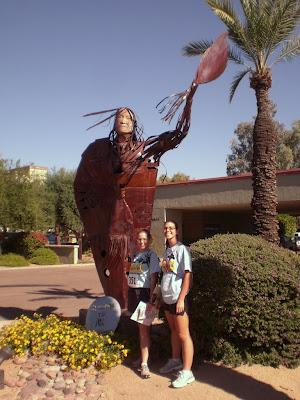 The Dares were fun. One was an army sergeant dare - we had to create our own "I don't know but I've been told" chant and then do 20 push-ups. Another one had us doing a 3-legged race twice around a large circle. We had to search in the landscaping of a business for garden stakes that had values assigned to letters to get a total point value for a given word. We had to successfully play bolo golf - which Laura completely mastered! I got to be the lucky one to complete the "bubble challenge" - On a paper plate was a piece of bubble gum completely covered in a mound of whipped cream (mmm...whipped cream). I had to get the piece of gum off the paper plate without using my hands and then chew it enough to blow a bubble. 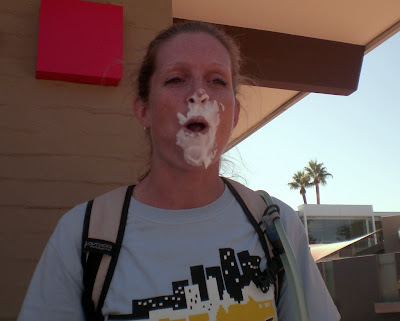 After what we calculated later to be about 7 miles, our final stop was at Dos Gringos. There we had to put together a 60 piece puzzle. We zipped through that and checked in. The timer dude clocked us in, checked our pictures and our Dare completion sheet and announced that we were the 7th team. 7th out of 40! Awww, yeah!! Even with doubling back over a mile, we rocked the Urban Dare! Woo Hoo! What a great day!!
Posted by Diamond Girl at 12:01 AM

We had a Portland version of the "Amazing Race". John was the go-to internet guy. The oddest thing they had to do was go to a comedy club and go on stage and tell a joke. :) YIKES!