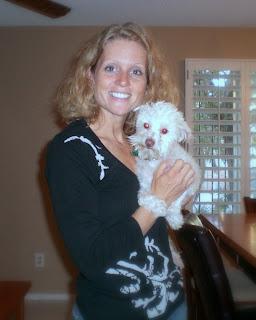 Little Hank Williams went back to the shelter on Saturday. He was an annoying little dog, but I'm sure he will make some family very happy. He has to get neutered and then he'll go up for adoption. I'm sure he'll be out of there in no time. He's got everything going for him - he's little, he's friendly to men, women and children and he's good with dogs and cats. Since there is no section on his kennel card to mark off that he licks incessantly, he never sits still, he's neurotic and he barks a lot, his kennel card will only have glowing reviews. Good luck, little Hank Williams! 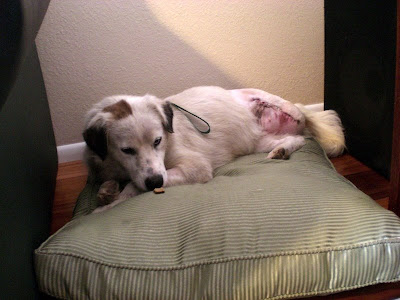 Mo is unusual in that the shelter staff actually knows her story. Her owner is dying. He is in the hospital and his son can't take the dog because he's spending all his time with his father in the hospital. The son asked his ex-wife to take the dog for them, she agreed and Mo went to live with the ex-daughter-in-law. Mo wasn't thrilled with that plan and immediately ran away (literally immediately - within the hour of arriving at the lady's house). She ran away to some train tracks, and this is where the story becomes unclear. Either she got caught in the tracks or was hit by a train (?) but in some manner her back left leg was completely smashed and embedded with dirt and gravel. Someone found the dog and called the Humane Society - they EAMTs picked her up and they immediately amputated the leg when she arrived at the hospital. The Humane Society located the new owner who realized that she did not have an appropriate place for the recuperation of poor Mo, so she signed her over to the shelter. The original owner is just devastated by all of this. The poor guy is dying and he doesn't even have the peace of mind of knowing that his dog is taken care of. This is one of my worst nightmares (Patrick...you'd better take care of F/G if anything happens to me!!!) Now I've got a very depressed, but very beautiful Australian Shepherd named Mo.

The first day she was here, Mo didn't eat or drink. She ran away from all of us and found a little alcove to hide in. She was lethargic and depressed all day. She was very slow to warm up to us - thus earning her the nickname Slo-Mo. That and she's still learning to master motion on three legs. She showed a tiny bit of interest in Georgie, but she refused to meet Frankie. I took a picture of how the introduction went ... 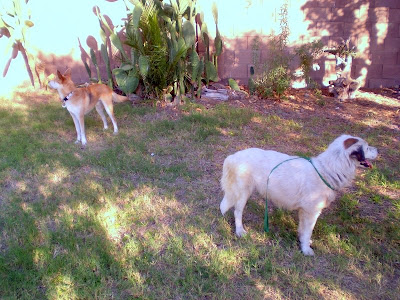 This went on for about 20 minutes, then I finally got bored and took them inside where they continued to ignore one another.

The second day, Mo was much more willing to be with us. We were preparing for a big party at our house, so there was lots of activity - cooking and cleaning and moving furniture. She chose to be in the kitchen during all of it. She is tolerating the dogs well enough (except when Georgie infiltrated her alcove - that led to some snarls and snaps being exchanged). Frankie is still scared of her, but he's a wuss anyway. The really good news is that Mo is now eating - which shows that her depression is abating and I don't have to hide all the sharp objects and prescription drugs.

Our big problem right now involves peeing. She only pees when she's laying down on her bed and then she just lays in it until I put on her leash and drag her away. I've not caught her in the act yet. I'm not sure if she can't pee standing up (she makes the motions when I take her outside) or what. This will require more study and possibly a vet visit. It also requires many loads of laundry and lots of Nature's Miracle. I've stopped giving her dog beds and now she only gets towels. But isn't she just beautiful?? 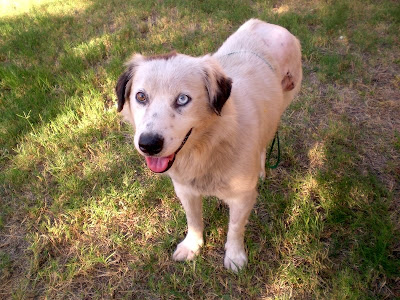 Updated to add: The original owner (the guy who's dying) has been kept in the loop of everything that has happened to his beloved dog. He called the Humane Society and donated the cost of Mo's surgery and post-op care. They in turn called me and asked if I could send some pictures to them. They are going to forward the pictures to the guy so that he can see that Mo is in good hands. I am so heart-broken for this man.

The picture of Frankie and Mo ignoring each other is hilarious. It couldn't have been better if it were staged.

these pictures are so funny but then I got to the end of your post and just started crying. sheesh. but, Mo is indeed beauteous. how fortunate he has such a good foster mom :)