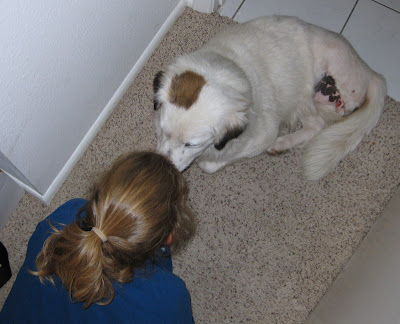 Mo is healed and ready to go back to the Humane Society to be put up for adoption. She's actually been healed and ready for about three weeks now. I've been keeping her for "extra socialization". The real reason I've been hanging on is that I'm having a hard time letting go. Now it's time to make the decision...do I keep Mo and quit fostering or do I put her up for adoption - which would completely break my heart, but would let me keep fostering and helping out all those animals who need me??

I've had about 15-20 foster dogs and have only considered keeping two others. Kaiser, the Standard Poodle, was so great with Frankie and Georgie, very playful, very fun and I LOVE a Standard Poodle. It was somewhat disconcerting that he liked Frankie more than he liked me, but did I mention that I love Standard Poodles? And he was soooo smart! Alas, fate stepped in and put me in touch with a lady who does therapy dog work at Phoenix Children's hospital and who was looking for another Standard. She adopted Kaiser and now he's a therapy dog. 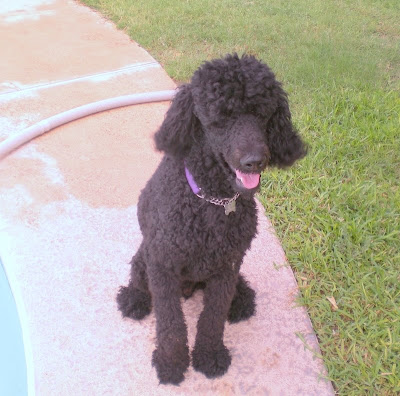 The other was Ella, a three-legged black terrier mix. She was the only foster who actually learned to behave from watching Frankie and Georgie. They have to down, stay at the door before I let them in and they do the same thing before they are fed. Within days, Ella was doing the same thing without me even asking her to. She was also super-affectionate. I could whisper her name from across the yard and she would come running at me as fast as her three little legs would carry her and then launch herself up into my lap. I still regret not keeping her! I stalked her at the shelter when she went up for adoption and watched all the people who played with her. I gave her one day there and if she didn't get adopted that very day I was going to take her back. But she did get adopted and the people who were taking her looked like decent folks. I hope they appreciate that little girl. She was AWESOME! I get sad just looking at her photo - I really should have kept her. 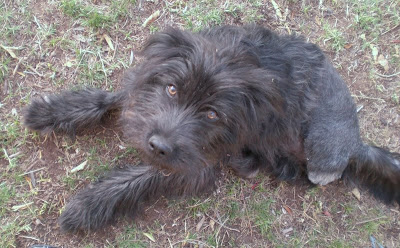 And now there is Mo. Slo-Mo who took almost a month to warm up to us is now dancing with happiness when she sees us. In the mornings she gives me the "Woo Woo Howl of Impatient Joy" when she's ready to be let back in the house. I love a dog that howls and her howl is so pretty!! She follows me everywhere. This makes me feel pretty crappy when she's all settled in and I just have to leave the room to grab my phone or something - such an ordeal for her to get those 3 legs going and then we return to the same room almost immediately. She's still not in love with the Frankie and Georgie, but she tolerates them just fine. She'll really put up with almost anything if it means getting to be near me. She has absolutely decided that I am her person. 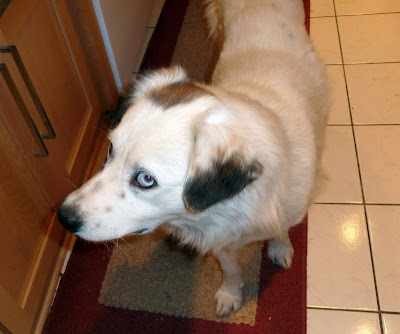 The best dog I ever had, my Forever Dog, was Joe. I miss him every day. Mo reminds me of Joe in so many ways. This definitely makes me want to keep her. Even Pat commented, without any prompting from me, that she is like Joe. Right after I got Joe, I really wanted a white, fluffy dog, one that was tall enough for me to pet its head while on a walk. Mo is the exact dog I was looking for 13 years ago. Now that I finally have my dream dog, it only makes sense to keep her. And did I mention that she loves me best? This definitely makes me want to keep her. And really, the poor dog has already been through so much, I'm afraid that throwing her into a state of upheaval will really be scary for her now that she has finally gotten settled again. I'm almost at 100% that yes, I want to keep her.

But then I think of all those injured and sick dogs at the shelter who need to get out of the Second Chance hospital and into a foster home. If I keep Mo, I won't have time or space to keep fostering...and that breaks my heart.

That's really a tough one!

Although, it sounds like your mind is already made up. :-) All I can really say is "go with your gut." You know the answer.

If you decide to keep her, there are plently of things you can do besides fostering to help dogs in need....like, you know....adopting one. :-P

You know your answer. Will you look at Mo's picture with such regret?

I am always the person that says, no I won't adopt my fosters, but there are just those exceptions that come along that fit. Mo is one of those.

Duh. You've only answered yourself a hundred times in this post. Keep her. Then make it your new goal to encourage everyone you know to foster. You can still make a difference and keep Mo. After a while you can sneak a foster in here and there. :)