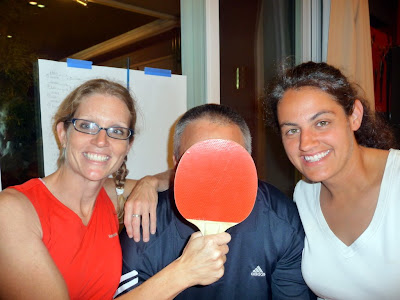 Isn't that the cutest picture you've seen of NFBF? It was taken at the Fabig's Inaugural Ping Pong Tournament last weekend.

It was a real tournament, complete with brackets and everything: 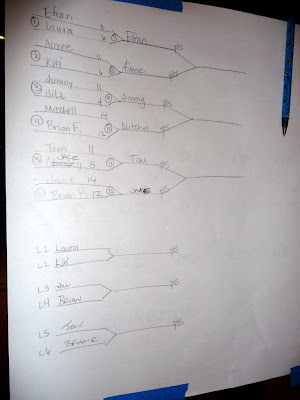 According to the invitation, we were playing for two awards - "PING PONG MASTER OF THE UNIVERSE" and "MAKES THE MOST PEOPLE SHAKE THEIR HEADS IN PITY WHILE PLAYING PING PONG AWARD". The invitation advised to "get out your ping pong outfits", so Jamie (of course) did: 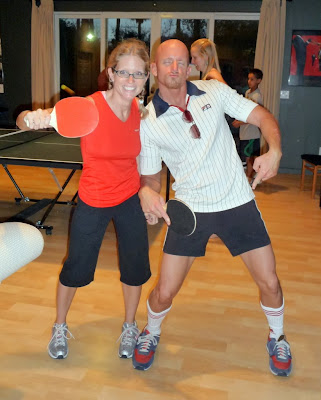 I was very sad that the best I could do for a ping pong outfit was to look kind of sporty. Next year I'm gonna wear this (sans the look of drunken stupidity): 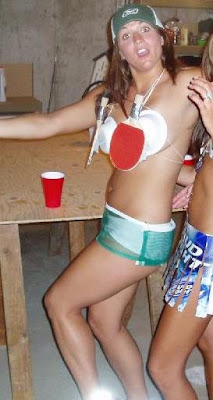 (I don't know this person...this is a random picture from a google search for "ping pong outfit" and was apparently a costume for an "anything but clothes party". Quite clever actually...)

My first opponent was Kiri's husband, Jimmy. He's really good and he's been playing quite a lot at work. Yes, at work. What am I doing wrong? My work consists only of budgets and catering and website updates. Anyway...like I was saying, he's really good, but I was on fire! See?? 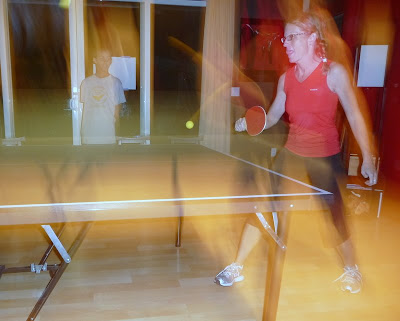 But then I got burned. I only managed to score 4 points on him. And I have to admit that 2 of them were because his plays were disrupted by people walking by and he was too much of a gentleman to hit them. I am a poor enough sport that I accepted those points without letting him have a do-over.

Luckily it was a double elimination tournament, so I had another chance to win the loser's bracket! My next opponent was Brian. We were more evenly matched. Alas, after a hard fought game, I still lost. Ouch.

But despite going 0-2, I'm no loser. I was the big winner! The big winner of the "MAKES THE MOST PEOPLE SHAKE THEIR HEADS IN PITY WHILE PLAYING PING PONG AWARD" that is. My prize was a wiffle ball set with the advice of "perhaps you should try a different sport." :( 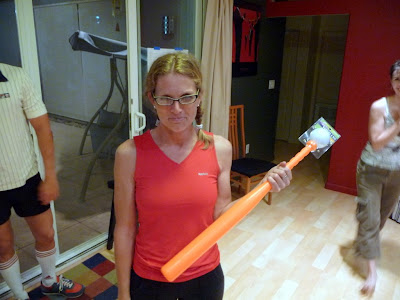 Kiri lost her first two games, too. Can we at least win the cutest girls award?? OK? Thanks. 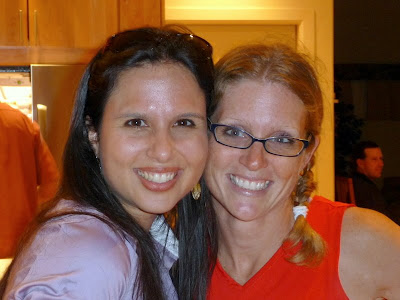 Tangent: Does Kiri's face look exceptionally wide to you? She'd say it does. She claims to have the widest face EVER. To prove or disprove this assertion, we measured faces at book club tonight and out of 8 girls, hers was only the 3rd widest. That sounds pretty average to me. Sarah and I tied for smallest.

Jamie was playing to defend his Travel Troupe ping pong title from the cruise and he was doing great. He took out all the good players. He was really good at spanking that little ball with that paddle. (yeah...he asked me to say that!) 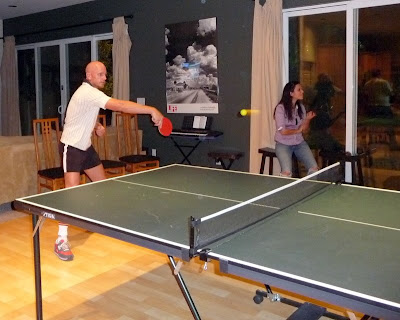 But then he met up with my old nemesis, Jimmy. Jimmy won the first game pretty easily. In the second game though, Jamie was playing great. The game went into ping pong triple overtime. We thought there was going to have to be a shoot-out. But finally Jimmy pulled it out and was crowned "PING PONG MASTER OF THE UNIVERSE" and given the fabulous prize of hand lotion and softee gloves to keep his ping pong hands in tip-top shape. 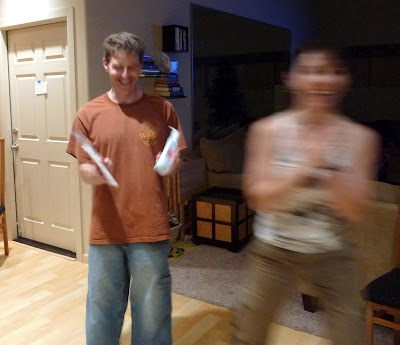 Jimmy - I hope you had fun because I'm sorry to say that you aren't being asked back for the Fabig's Second Annual Ping Pong Tournament.

I didn't lose my first two games!!! I lost the first one to Amy, and then beat tall blonde girl and then lost to 11 year old kid. Get yer facts straight!!! And, Jimmy is too invited back to the second annula ping pong championship because we are making WAAAAYYYYY cool championship belt spray painted gold!!!!

Kiri, get your facts straight. The kid was 10. Jimmy will have to beat him when he turns 11 to retain the waayyyyyaaayyyy coooool belt.

Jill, you said you had to leave book club early to WORK. seeing when you typed this, I now know you are a liar and you just don't like us. Was it our commentary on Mormon underwear??? hilarious post, btw...

Just getting around to reading this now (June 8) -- I would NEVER in a bazillion years think Kiri has a wide face. :/ For what it's worth - I would've won HANDS DOWN -- I think my face is like 10 inches wide. ;)