The Adventure Begins...(it's just a big hole in the ground, right?)

The Grand Canyon trip started at my house, short four people. Two people were meeting us in Seligman and two people missed their flight from Newark. They spent the day in the airport shuffling from stand-by list to stand-by list, finally making it into Phoenix 12 hours late. 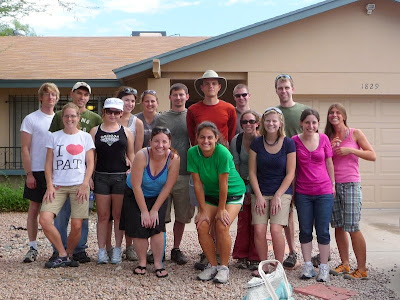 The plan was to leave Phoenix at 3:30 pm. Yeah, right...get a group of 18 16 people to leave on time? Ha! Well, you might think that until you experienced this particular group of people. We left closer to 3:00 pm! AHEAD OF SCHEDULE! It was pretty much a sign of things to come. I cannot believe how cooperative and easy-going this group of people was for the entire trip!

On the way to Seligman we experienced some typical Arizona monsoon weather - rain, wind, etc. Our car also experienced this very atypical tornado? Alien dust devil? Microburst? I have no idea what it was, but the picture doesn't do it justice. It glowed like a reflection on glass (which is what I thought it was at first - just an optical illusion from my window). It went from the ground all the way up to that black cloud. It was bizarre. 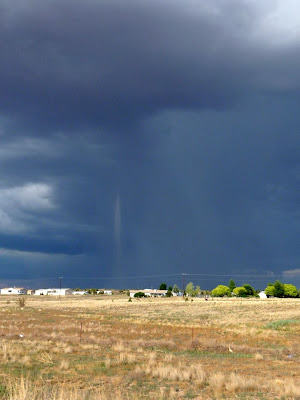 We stayed at the Canyon Lodge in Seligman. If you ever do this trip, you should stay there. The owner guy was very accommodating (he opened up the continental breakfast til 10:00 at night so we could stash some food in our room) and the beds were really comfy. He also recommended a yummy restaurant that would give us 10% off. This is the grown-ups table: 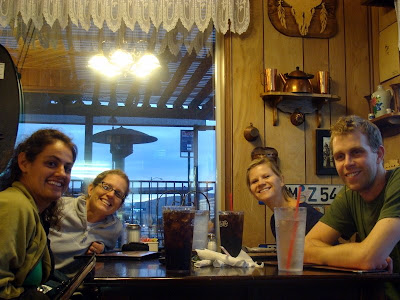 And this is the kids table: 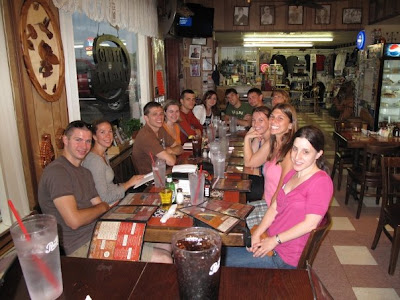 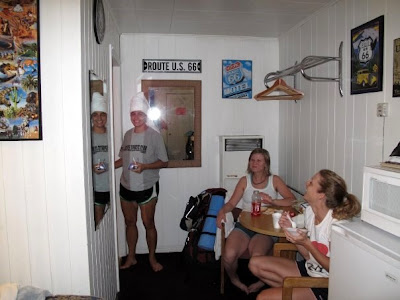 The drive to the trailhead was approximately an hour and a half or so. We parked and started to load up. This process took a little longer than necessary, but we still started the hike on time. Finally, all 20 of us together: 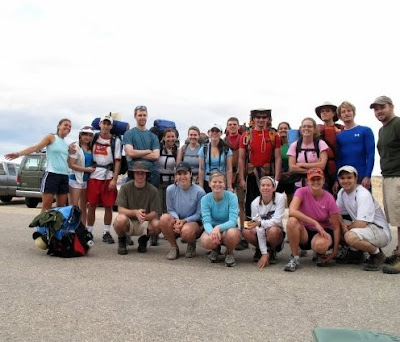 I won the award for highest pack weight to body weight ratio. It was really terrible. I went through my bag the night before and took out a bunch of food and half my clothes and my pack still weighed 45 pounds. I was starting to wonder if I really needed so much water?? This picture is not just of my pack...look closely and you can see my little head. This was me trying to put the pack back on after my last nervous-pee stop. Instead of anyone helping me, they just took pictures, pointed and laughed. 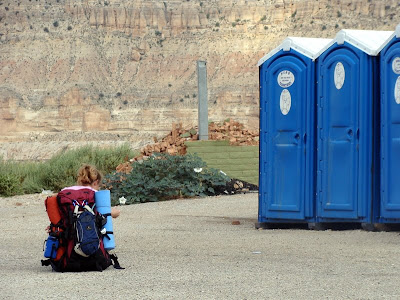 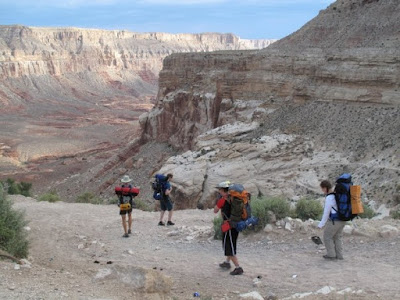 I don't have any pictures of Christy and I starting the hike, because I was too impatient to get going. Christy, Aimee, Dan and I were the first to depart. Within minutes Christy and I ditched Aimee and Dan (sorry, guys) and within minutes of that were overtaken by Craig and Nick. With the exception of those two boys, we didn't see anyone from our group for the next four hours.

The hike was so very painful. My pack was too heavy and just a tiny bit too big. It didn't sit right on my hips - it was just a little too low putting too much weight on my hips and legs. I felt like I was wearing a hip corset. I could barely lift my feet. Shuffling was really the only option. Any time I had to take a step higher or lower than six inches, I got searing pains in my hips and my legs protested. It was miserable. Christy had the opposite problem. Her bag was not really a backpacking backpack and she had to carry the whole thing on her back with none of weight on her hips and legs. Yet, despite our pain, we kept up as fast a pace as possible. We were lucky that the day was overcast, so it wasn't too hot.

The worst part about the bags was that we were unable to look around while we hiked. If I looked up, I would tip over backwards. If I looked to the side, I would tip in that direction. So, pretty much we only saw the dirt and rocks we were walking on. We didn't take hardly any pictures - it was just too painful to stop. Eventually we caught up with Craig and Nick who had stopped for a snack. We took the pain and took this picture: 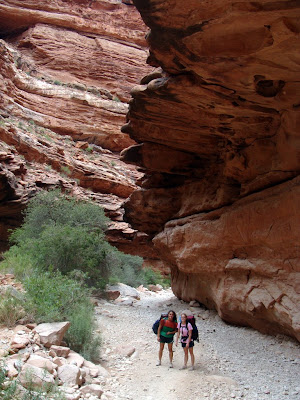 This is the only other decent picture I managed to get on the way down. Since they were below me, I didn't have to look up to take it. :) 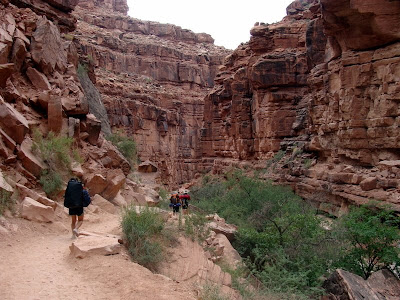 The trail kept going and going. I thought we'd never get there. We eventually got to the village (8 miles in) where we stopped to pay the camping fees and, most importantly, immediately booked a mule to carry our bags out of the canyon on the return trip. I was determined to see this big hole in the ground and it obviously wasn't going to happen with my backpack on!! Hurray, mules! My new favorite animal!!

The campground is two miles past the village. These two miles were the worst of all. The sun came out, bringing with it the heat. The trail was super-thick dirt. I was getting a blister. My hips were screaming at me in protest. Christy's back was screaming at her so loudly, even I could hear it. But we kept going...and going...and going to the refrain of "Owie. Owie. Owie." and the silver lining refrain of "Yay, mules. Yay, mules. Yay, mules."

And then we round a corner and we see this: 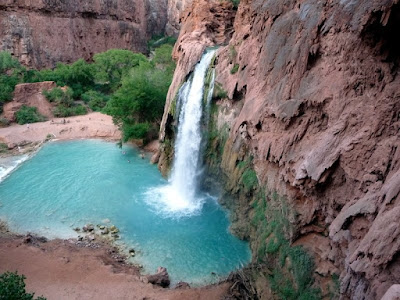 Holy God! It was so amazing. I wanted nothing more than to jump in that pool and never get out. But sadly, we had to trudge past it to get to the campground. We were still with Craig and Nick and we sort of celebrated our victory of being the fastest hikers down. Including the half hour we spent in the village waiting to pay for the campsite, the trip down took about four hours. Most exciting was that Christy and I didn't die from the pain! What troupers we are!! Yay, us!

We picked a decent campsite, ate lunch, set up our tents and waited for the rest of the group. Within an hour, most of our folks were there. Eventually, we all took off to swim and explore Havasu Falls. Dang, it's beautiful!! 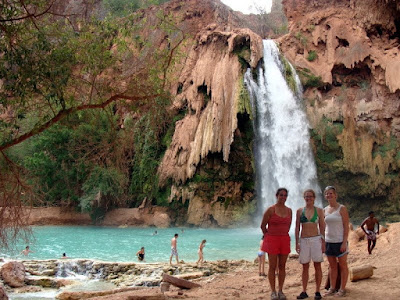 Swimming was my intention, anyway. The sun had gone under again and the spray and wind from the falls were so frickin' chilly (this is how swamp coolers work in the desert!) that I couldn't bring myself to get in the cold, cold water. I'm a wuss. Everyone else swam and got clean, though. 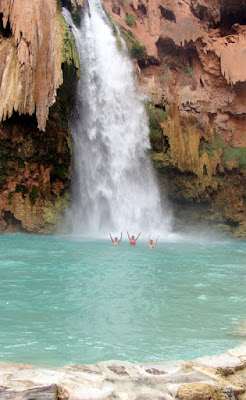 After Havasu Falls, most of the group went back to camp and relaxed. Christy and I aren't so good at the relaxing thing, so we decided to go hiking. The 10 miles we'd already done apparently weren't enough. We went back up towards the village and checked out Navajo Falls (in the background) and the newly formed Rock Falls in the foreground. You can see that the tribe is still doing a lot of clean up work from the big flood last August. 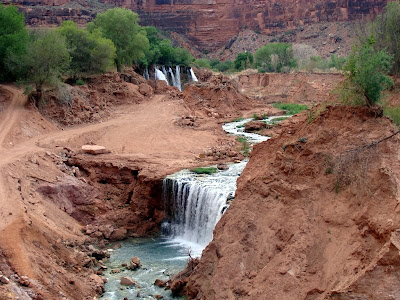 A closer look at the new Rock Falls, which were created by the flood. They aren't even listed on the Havasupai website yet. We only know the name because there is a hand painted sign posted at the top (you can see it behind my butt): 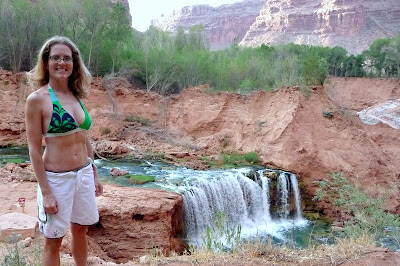 We didn't explore too thoroughly because we knew we'd be back to spend a day doing just that, and when you're stuck in a big hole in the ground, you need to divvy up your entertainment carefully!

This doggie was doing some thorough exploration: 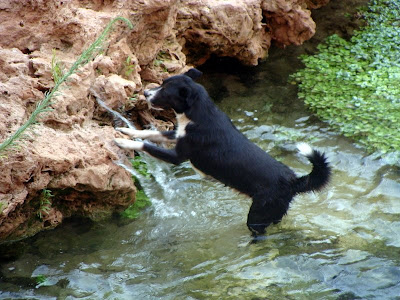 There are lots of dogs wandering the trail, the village and the campground. They are nice dogs, but they aren't really very interested in people. They pretty much just co-exist with the campers. It was comforting, however, to have lots of dogs nearby! Felt just like home!
Posted by Diamond Girl at 6:06 PM

I have to say, the picture of your little head has cracked me up more than I can ever possibly explain. Poor Zippy!

honestly, that pic of you deserves a post of its own ... that backpack is clearly PURE evil.