Saturday was the big birthday celebration - Storming the Castle competed in the Oyster Adventure Race in Denver! YAY!

First of all, a big, giant, huge, over-sized THANK YOU to everyone who donated to my "Buy a Clue" fund!! Because of your super-duper generosity, we earned both available course clues and they both proved very helpful. Without your assistance, we might still be out on the course. One of the clues we received was actually the full clue to our last destination! Sweet!! We were able to figure out the puzzle the night before. We then went to the destination - the Three Dogs bar - for dinner on Friday night to be familiar with the route. 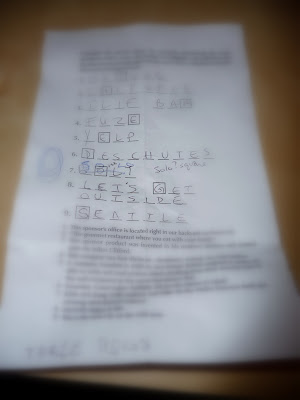 Second of all, thanks to Christy and Kiri, my fabulous teammates. Extra-special thanks to Kiri who showed up in Denver with the assumption that we were racing the Half Oyster (15 miles) when I had actually signed us up for the Full Oyster (30-40 miles). Oops. I guess my communication on this point was slightly flawed! And on top of that, her flight on Friday night was canceled and she couldn't get on the next flight out. She ended up being put onto a flight to Salt Lake City with a stand-by seat on the connection to Denver. Luckily she made it, so I didn't have to kill her. :) And I also need to thank her for putting up with me and Christy. I doubt that we are very much fun to race with... 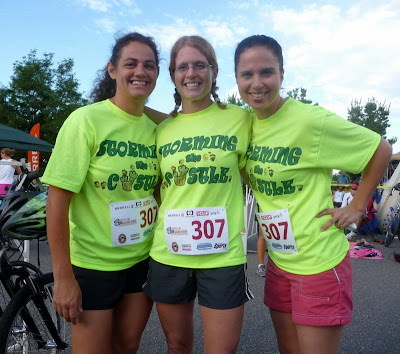 Third of all, a big WOO HOO to my NFBF, our team assistant. He helped me learn my way around Denver in a few short hours on Friday. More importantly, on race day, he was the man with the knowledge - directions to our locations, answers to our clues and, with stellar eavesdropping/friend-making skills put to use on the teams ahead of us, he even had some of our destinations plotted and ready to go before we even had our clues in hand. He was the true super-star of the race! Here he is lounging in our transition area, on the furniture he "borrowed" from the hotel pool for the day: 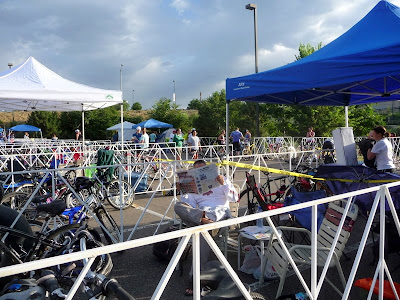 And let's not forget Pat. Um....thanks, Pat, for watching a movie on your ipod while you were supposed to be keeping NFBF company in the TA. 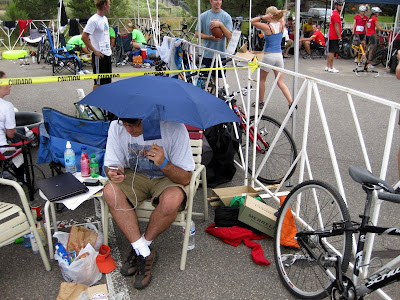 I jest. Pat was actually very instrumental in our good showing in this race. This is because it was PAT who bought the Double-Stuff Oreos and brought them to the race. And every 30-40 mile race needs DSO's!! Kiri fueling up: 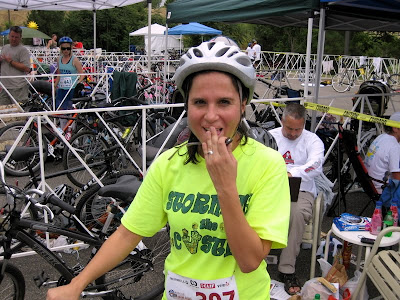 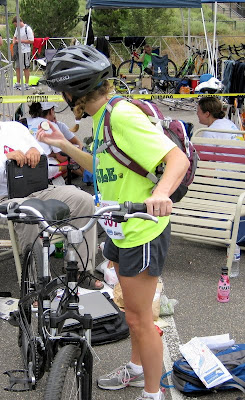 Now let's get on to the race itself.

Onion, Yellow squash, Spelt, Tomato-basil penne, Energy drink, Romaine. The first clue was to bike to a farmer's market and purchase an item that starts with every letter in the word OYSTER. I got excited at one stand when I saw rhubarb because we still needed an R. Yay! Upon closer examination, it wasn't rhubarb at all. It was chard! Ergh. One team overheard me call it rhubarb and grabbed some to buy it. I had to play nice and tell them it wasn't really rhubarb. "Chard!", he exclaimed. "How do you spell oyster with Chard?!?!?!" The vendor kept trying to sell us an eggplant since everyone else had bought an eggplant and Christy kept telling him, "We don't need an E!!!" Finally he let us go. We needed the R and he was out of radishes, so we moved on to the next stall for the romaine. Whee! It only took us about four minutes to get in and out of the market.

The next clue was to run to this hotel by the stadium, climb up the stairs to the top and look out the windows of the 360 degree-restaurant to find our next clue. 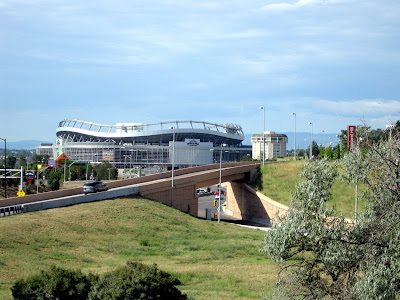 We saw the Merrell flag at the Children's Museum across the highway (the colorful building on the left in the picture). Once we got there, we had to (got to!) go down a 50' slip-n-slide complete with dish soap and a hose....just like when were kids, but better! There was no hill like that in my back yard! Whee!!

We then had to do something in the river that didn't quite turn out like they had planned. We were supposed to have one teammate navigate up the river in an innertube, or some type of flotation device to a designated point where a second teammate gets in the tube and floats back down. The third teammate could help push, pull, paddle. But somehow, all the racers were just carrying the tubes and running up the river and the second teammate was running back down the river. Maybe it was because the river was so shallow? Or because the volunteers weren't enforcing the rules? I don't know - but no one was in their tube...so neither were we.

The next clue sent us searching for Chipotles. There are four in the downtown area and we needed to find the correct two. Knowing that Chipotle was a sponsor, Kiri had pre-mapped all of the Chipotles in the vicinity so we knew right where to go. Yay, Kiri. Signs in the restaurants directed us to the water vendor sponsor of the race. When we got to their distribution plant, we had to wait in a big, long line to complete our task. We met some interesting people while waiting in line: 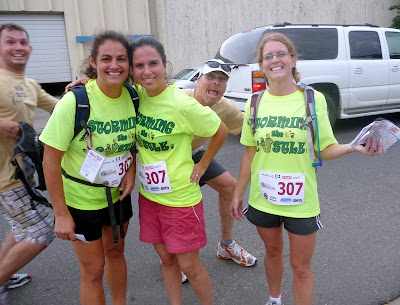 The task was to unload a big cart of 5-gallon water jugs and carry them across the parking lot and fill a new cart. 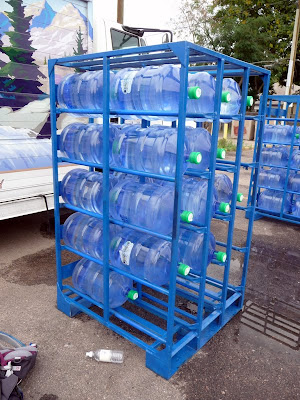 There were 30 5-gallon jugs. 5-gallon jugs of water are very heavy!! Carrying 30 of them was very difficult and time-consuming! 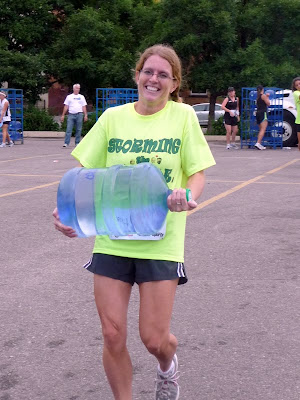 This would have been a good time to have a big strong boy on our team who could carry two jugs at once like the boy next to Christy. But, we did alright! 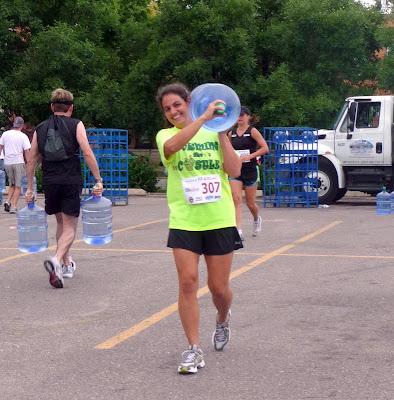 We took the light rail back to the 16th Street Mall area and headed back to the TA. Our next clue was to get Denver's version of the New Times (I can't remember the paper's name) and find the Oyster ad to tell us the location of the next clue. NFBF had already picked up one of these papers earlier in the day (he's amazing!!!) to help pass his time. He already had the ad located and the clue to the destination solved when we arrived. Yippee! We were to bike out to a cemetery and take our picture with a statue they showed on our clue. Biking to the cemetery: 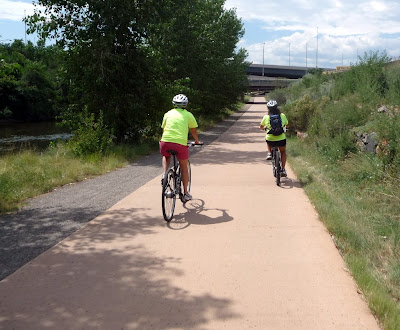 Yes, Kiri's seat is very high. This is because the easy-adjusting seat adjusted a little too easily. Every 5 minutes or so, the mechanism would loosen and the seat would fall all the way to the frame of the bike and then start turning sideways. Finally when she set it this high, it stayed put. We overshot our destination a little bit and came in from the back side of the cemetery. We had to lift our bikes up and over a barbed-wire fence to get in the cemetery. This felt somewhat illegal. The statue was easy to find because it was so tall. Looking sexy in our bike helmets: 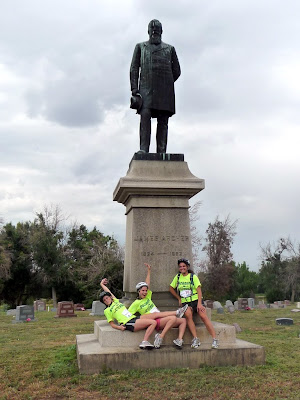 To save time, we left via the entrance to the cemetery like normal people who don't break into cemeteries by climbing over fences....and we were promptly lost. We found ourselves in an industrial area where it seemed that every road led to a highway on-ramp. Uh-oh. We should have gone back out the barbed-wire fence route! Our predicament was even more of a problem because the cemetery was so far from downtown Denver that it was off our map. Uh-oh. However, with some good Kiri/Christy intuition, we headed in the right direction and got back on the bike path without losing too much time.

The last clue was the word puzzle that we had already solved, so we were able to drop our bikes and head out to the bar. Poor Kiri. At this point, her knee was hurting so badly she could no longer run. She could barely walk fast. But she kept going and going and didn't give up. Yay, Kiri! We did a quick name-that-beer puzzle that was supposed to involve beer-tasting but for us involved only guessing, and we were immediately headed back to the finish line!

Storming the Castle heading in - 5 hours, 7 minutes and 24 seconds! 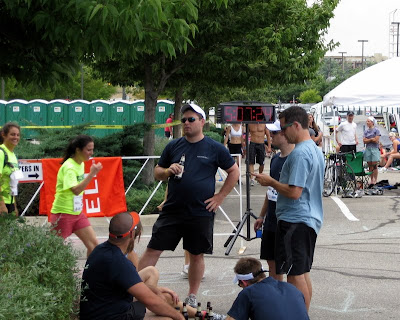 Here we are as the volunteer checked our last passport and checked us in. We did it!! 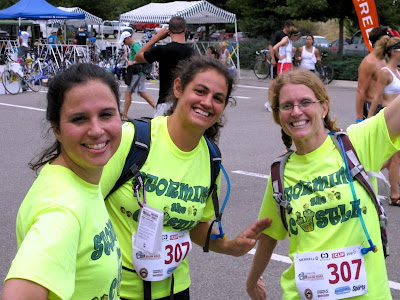 Woo Hoo!! We did the Full Oyster! The pain and exhaustion felt very similar to doing the half-marathon, but this was way more fun! I can't wait to do it again next year!

And just because I think this picture is funny...here is the croppped version of our time: 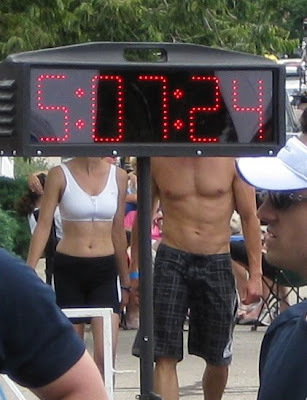 I love how cool we are!