I am sad to report that Storming the Castle didn't win the Great Urban Race National Championships. :( I know you all assumed that we would. Sorry to let you down.

However, we did come in 14th out of 90 of the best teams in America! Woo hoo!! Only 22 of the 90 teams finished by the 3 hour race cut off time. We finished in 2 hours and 37 minutes. This put us 7 minutes out of making the finals. We are little bit disappointed (well, I am, anyway. I don't think Christy is as much) because we (meaning me) made an error that cost us about 10 minutes, but we are still proud of our fairly decent result. And we are hooked on urban adventure races!! SO FUN!

The race took us from the French Quarter in New Orleans to Tulane University (about 5 miles away) with various stops in between. We caught a streetcar towards Tulane while our super-stellar internet support, Kiri and NFBF, were busy looking up clues for us. Our mistake was getting off the streetcar when other people did, even though we hadn't finished mapping our points. We decided after getting off that we didn't really want to follow those people. We made decent use of our mistake time by going into a tavern to buy $20 worth of ones. One of our clues said we needed to donate $10 to St. Jude, but the donation needed to be in singles that had the letter F in the serial number. Donating the money: 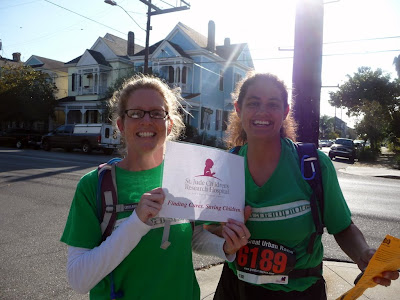 A lot of people skipped this one because they thought it would be too hard to find people with whom to trade money. When we told other teams that we did it at a bar, they felt kind of silly. :)

We got back on the streetcar and saw a team from Austin - the notorious collaborating teams who rock this race. The boys got off so we did, too. We couldn't keep up with them running, but we caught up at the clue that led us to Mystic Signs: 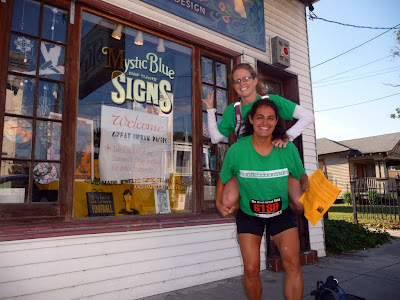 They got way ahead of us again (cuz they actually are runners!) but we caught up to them again at the streetcar stop. They were having a bit of a meltdown - arguing if they should run for a 30 minutes to Tulane or wait 15 minutes for the streetcar. This was a no-brainer for me and Christy. Run? To Tulane?? Yeah, right. The Austin boys took off running and 20 minutes later ended up getting on our same streetcar, all out of breath. Hee.

At Tulane we had to find a triangle puzzle written in chalk somewhere on campus. Wow - that could take forever. Luckily we saw people gathered around, so we didn't have to search too long. 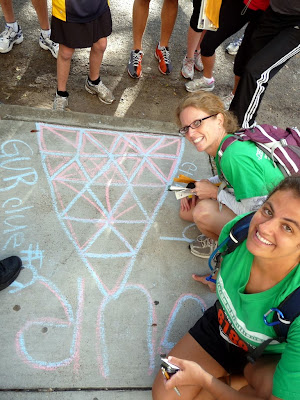 The task was to count how many triangles were in the clue. IMPOSSIBLE. Some of the intended triangles were actually trapezoids. And the pink lines were smudged and you couldn't tell if they were supposed to be on top of or separate from the blue lines. We knew that all we could do was guess. Many of the teams were all aflutter about how unfair this clue was. Also at Tulane, we had to solve a ridiculous math clue (thanks to both Christy and NFBF for not making me do this!) to find out what room in a certain building to go to. In that room (201), we had to do a word search puzzle. We rocked this and gained some time on some other teams.

A random clue on the list was a dark and fuzzy picture of a bell. You needed to find the bell and take your picture touching it. No one could find the bell. All the locals we asked didn't know where it was. Google was no help. I talked to several teams afterwards and none of their internet supporters could find it. Yeah, well they don't have internet support like mine!! Kiri found it (after looking thru 300 pictures of bells on Flickr!!). She's a super-star!! At about the same time, we happened upon it on Tulane's campus as we were running by. 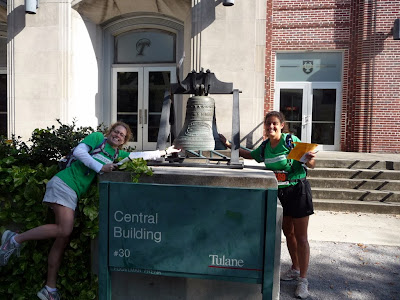 We then took a streetcar halfway back to the French Quarter to a juice bar clue. We had to make juice by squeezing oranges by hand. Mmmm, citrus smells good! Running after drinking a glass full of fresh OJ is a little uncomfortable though. One good part of the OJ stop was that we showed one of the volunteers there how unfair the triangle clue was. She realized that the clue had been sabotaged (dang Tulane pranksters!) and called it in to the race headquarters.

At this point, time was getting short and we still had 5 clues to go. We debated whether to take the triangles as our skip or the cruisers. The cruisers were these really cool 2 person moped things (I borrowed this photo from another blog, thanks Vignette!): 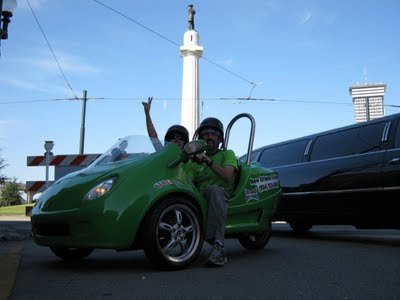 You had to drive them around a mapped out course through the city. We figured t was going to take us 10 minutes to get there, 10 minutes to drive them and 10 minutes to get to our next clue. If we skipped it, we'd save 30 minutes. But....if we got the triangles answer wrong, we'd get a 30 minute penalty. We decided to take our chances on the triangles guess, hoping that due to the sabotage, they would accept any answer. (Turns out that the bottom two lines and all the pink were added by the pranksters!) So, as fun as the cruisers looked, we passed them up.

We raced back to the French Quarter to the St. Louis hotel. We found the conference room indicated and inside the conference room we saw...LIVE 6 foot ALLIGATORS! We had to pick up the alligator and carry him around the room. Now, this alligator was pissed! His mouth was banded shut, but he was hissing and trying to snap. I felt really bad for him and didn't know if this was the most humane task to do...but I was still pretty excited to get to carry a real live alligator!!

We had to take a picture of our team with a cathedral, a clock and a man on a horse...all in the picture: 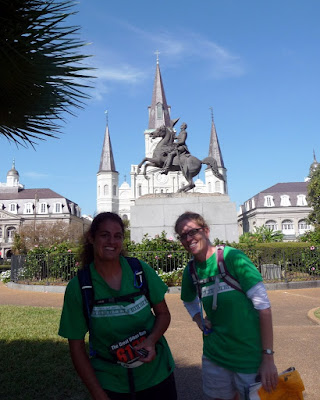 We knew where this was from our previous day's 9 mile walk around the French Quarter and nearby areas. Preparation finally paid off!

We had to take our picture with Martha - A Market Customer (location found by NFBF and Kiri): 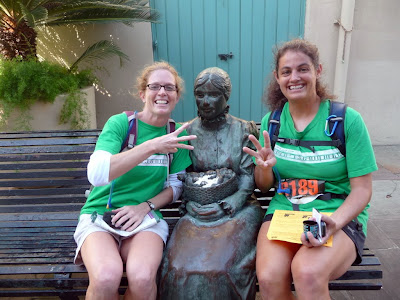 The threes indicate the last digit of the year she was sculpted. The last task was nearby Martha. We had to go on the stage at the French Market and complete a Charade. I got to do the acting. My phrase was Queen of Hearts. Heart was no problem, but I couldn't get Christy to get Queen. She got girl with a hat, but never made the leap to girl with a crown. :) I changed my tactic and did sounds like "lean" and we got it in no time.

RUN RUN RUN back to the finish line. I hate running. Seriously.

We knew right away that we didn't make the top 8. The photo checkers estimated we were around 17-18th. Our photos and clues were checked - our triangles answer was accepted like we hoped - a good gamble! We hung around and watched the other teams come in. We beat the Arguing Austin boys!! That was cool!!

Since we weren't a part of the finals race, we spent the afternoon exploring more of New Orleans. I mapped it and we walked an additional 6 miles - after the race! 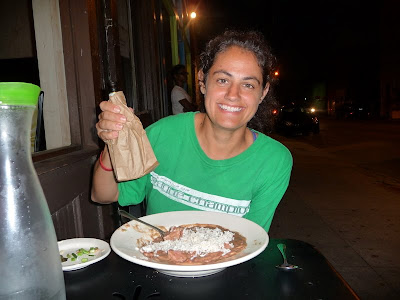 We can't wait til next year! We're going all-out to make the championships again!!
Posted by Diamond Girl at 11:35 PM