On Halloween night, Pat and I went to the Phoenix Coyotes game. Before the game, we went down to the glass seats to watch the visiting team warm up.

Teemu Selanne skated by and looked right at me. Huh. He must think I'm hot. WOO HOO! Whatcha doin' after the game, big boy?? ;)

He skated by a second time and looked right at me again. Teemu Selanne - looking at me!! I'm feelin' pretty darn pleased with myself... 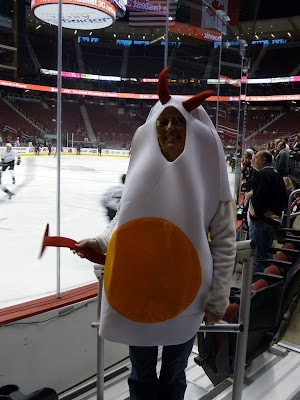 On his third skate-by, he gave me a big huge smile. Ah....deviled egg! Get it? I think Teemu has a thing for deviled eggs.


No one gave Pat a second glance. Hockey? check. Mullets in the building? check. 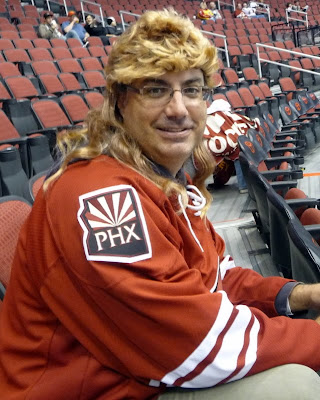 The deviled egg costume was a huge hit. Whenever I was walking the concourse, people would stare and just as I passed by them, they would get it. I could hear them start laughing and saying Deviled Egg! A-ha-ha-ha-ha!! One guy had to come up and ask:

I got to be part of the intermission costume parade. I think Howler thought I was a child and that is why he is patting me on the head. 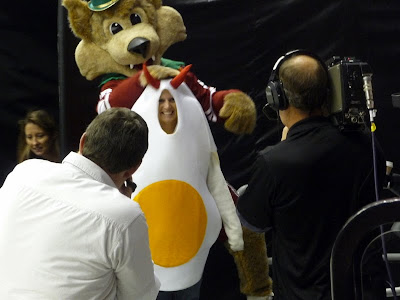 The game went into overtime and the Coyotes won in a shoot out. AWWWOOOO!
Posted by Diamond Girl at 9:47 PM

Why not deviled-egg for all Halloween events? You had 2 costumes!