This year marked the start of what will hopefully become an annual tradition for the Diamond family Christmas: The Male Diamond Christmas Cookie Making Contest. Wow, this event might need a new title. That one is a little unwieldy, I'd say. But it explains the event exactly: all the males in the Diamond family made cookies for a Christmas evening taste-off. My mother took pity on poor Pat and didn't want to make him schlep cookies all the way across the country, so Pat was named the judge.

Personally, I think, that as a connoisseur of cookies (mmmm.... cookies!!), I should be the judge (duh!) and Pat should have to bake like everybody else. How difficult would it be for him to put a ziploc baggie of cookies in his luggage? It might be hard for him (...er...me) to make it all the way to Springfield without eating all the cookies before arrival, but the schlepping would not be a problem. Besides, once you give Pat such power like a judgeship, it goes right to his head. He made everyone address him as "Your Honor" for the rest of the vacation. (I actually made that part up, but it is something he would do if he had thought of it.)

Anyway...Pat was the judge and the other men made the cookies. 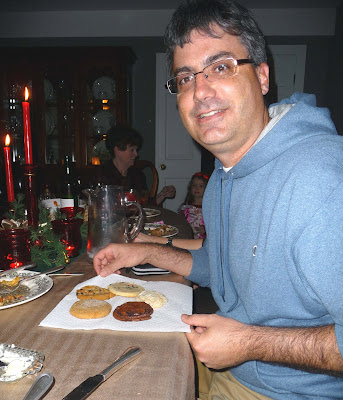 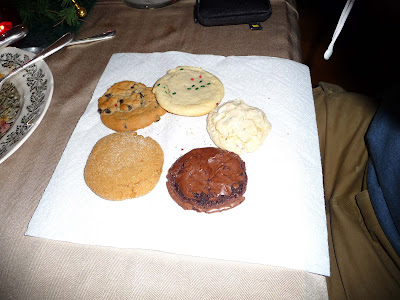 Yes, Kevin had two entries. It's not too hard to make two kinds of cookie when all you do is buy the rolls of pre-made dough and put them in the oven. Or, maybe it is that hard when you ruin two of Anne's air-bake baking sheets by putting them in water after baking. Oops.

Yes, my dad also had two entries. After spending over $37.00 (!) on supplies, you'd better hope he made more than one kind of cookie. Too bad neither of them were very edible.

Brett almost had an entry, but it would have been cheating anyway, as he was going to let Chris make the dough and he was just going to bake them. Slacker!

After awarding all the Best of Breeds, it was time to award Best In Show. After some deliberation, he announced the winner: 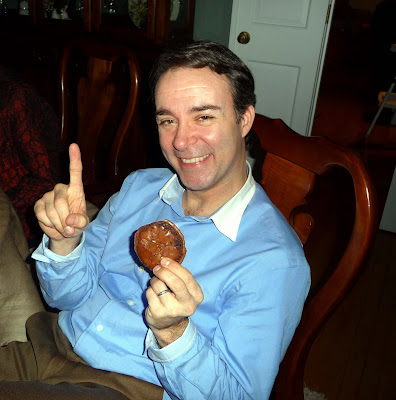 Next year I hope that Brett enters and that my dad stays away from the ginger snap recipes!

And that wraps up all the Christmas posts. Hopefully now I will continue the unprecedented productivity and move onto some 2010 stuff! I know you're dying to hear about my New Year's Resolutions!
Posted by Diamond Girl at 6:53 PM