Subbing Is Fun. Agility is Fun. Monsoons are Fun.

I played hockey on Thursday. I'm not officially on the team anymore, b 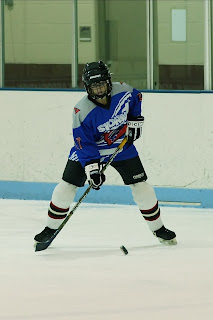 ut I am on the sub list. My friend David is out of town so I took his spot on the roster. It was so different from my last hockey experience during last season's playoff game where I was responsible for 5 goals against. Ergh. This time I didn't shoot any pucks on our goalie and I even managed to block a few shots and interrupt a couple plays. I made half-way decent passes to my teammates. I still am the weakest player on the team, but for this game I wouldn't consider myself a liability. And most importantly I had fun! If all my hockey games were like that, I wouldn't have quit.

It might have helped that I was in a really good mood going into the game. Right after work I took Frankie to drop-in agility practice. And though he didn't do very well - he was very distracted by the wind, the smells, the everything - we had a good time hanging out with the agility folks and enjoying the weather. It was the first big monsoon storm of the season. When we started running it was probably about 98-100 degrees. An hour later it had dropped significantly. We got three runs in before the rain came, and it came hard! We stayed for a while to see if it would taper off and allow us to run some more, but it never stopped. Finally, we made a dash for the car and headed home.

It was raining so hard, it was like bad special effects from a low budget film: The shower is on full pressure for a good rain. Then the props guy adds in the sprinkler, shaking it around so the rain is going every direction. Then another props guy starts throwing buckets of water, for the solid wall of water effect. Much of the drive home, I couldn't see anything at all. The roads were 6-12" deep with water on the flat surfaces, much deeper in the intersections. It rained this way for almost two hours but stopped by the time we left for hockey. I do love a good monsoon.

If you are doing the math - leave work, then go to agility, then rain for two hours and then hockey - you will realize that it was a late night! Our hockey game was scheduled for 10:30, but didn't start until 10:50 because the storm had knocked the power out at the rink for a little bit, delaying the game times. I didn't get home until 12:40 am. It was a late night, but a fun night!
Posted by Diamond Girl at 5:26 PM

Are you telling me you didn't sleep until almost 1:00AM and then got up and did the crazy desert adventure with Irene?

E-gads. Let me go take a nap on your behalf.