Frankie is so frustrating. I swear he is good in practice, but then we get to a 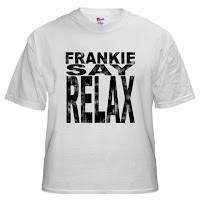 trial and he is just horrible! I've got some nice video that I will post soon of Frankie running at top speed going through every tunnel he can find, while off-screen and nowhere near my crazy dog, you can hear me screeching "Frankie, HERE!" The Frankie Say Relax t-shirt that I was wearing just didn't work the magic I was hoping for.

We ended up Q'ing in 3 out of 10 runs. Two were gamblers runs, which is Frankie's only real agility talent. The main point is for your dog to complete as many obstacles as he can in a 30 second time frame. Each obstacle is worth a set number of points - jumps are 1, tunnels are 3, etc. Most people design a 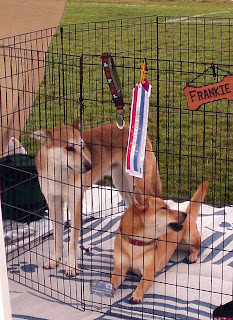 course for their dog to follow that will maximize their point collection in the time allotted. Personally I just let Frankie run willy-nilly since he's going to do so anyway and it seems that I still qualify every time. Setting a course for him would be a waste of time as he obviously believes that his course is better. That tunnel - the one WAY on the other side of the course? Yeah, to Frankie that looks like a good place to start. My lack of control and horrible handling are so frustrating, but at least I get to take home a ribbon or two.

We did Q in one of the jumpers courses - which is comprised of all jumps (clever name, huh?) so there are no tunnels or contacts to distract him or any weave poles for him to completely blow off. This once, I was able to corral Frankie enough to keep him on the right course. When he does listen to me, he is one of the fastest dogs out there. They compute the dogs' yards-per-second and Frankie's YPS was 5.62. Only a few dogs were higher than that and they are 1) border collies and 2) in the advanced classes. And that is why I keep doing it - once I can consistently keep him under control, I will ALWAYS win. And I like to win. Now if someone could just teach me to keep him under control!

I had a number of people tell me how much they like watching Frankie run. What they really mean is that they are glad it's my dog who is providing the comic relief, not theirs. I'm sure it is fun for them to watch him completely ignore me and zoom all over the course every time he goes out there. Oh, the joy he exhibits! But for me, it's just embarrassing. I have been doing agility with Frankie for two years now. The first year everyone blamed his crazies on being a young dog. He is now FOUR - plenty old enough to PAY ATTENTION! And I swear, he really does do well in class. Like my wakeboarding experience last week, it is frustrating to want something so bad, to practice so much and to still really suck at it.

It rained all weekend. It was nice for the first 2 hours of the trial both days, but then Mother Nature had other ideas and dropped boatloads of rain on us. On Sunday, it was so bad that they postponed the trial for a couple hours. It cleared up momentarily and then the rain started to pour again. Lots of people gave up and went home. Those of us that stayed had to pitch in double-duty to run the show. I ended up being ring crew for just about every run other than my own. I was pretty much impervious to the rain by that time because I was wearing this lovely outfit: 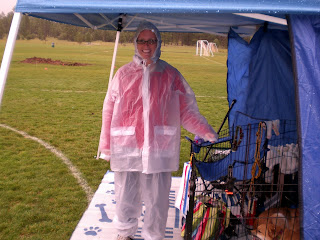 You can't see it, but instead of socks I am wearing poop bags to keep my feet dry, too.

Other than the weather and the humiliation on the agility course, it was a good weekend. My friend Vickie only needed one more Q to get the top agility honor - the Merit of Excellence - and she got it and it was awesome! She cried, I cried, she got to do a victory lap in the rain, everyone was happy. A few other teams have earned their MEX in DOCNA, but Vickie and Kaylie are the first team to start from the beginner level and work their way up. The others were grandfathered in at a higher level due to their titles in other venues. Ironically, the only run she needed to Q in was gamblers (perhaps Frankie could give them some pointers). See Vickie's video here:
Posted by Diamond Girl at 11:59 PM

Where did you get the shirt? I want it. And the poncho pants are pretty cool.