I Am My Own Rescue Organization

Anyone want a German Shepherd?

A few weeks ago I returned Sable (Disable), the slightly sketchy shepherd, to the Humane Society. I told them about her behavior issues being a little bit more than "kennel stress". I should have kept my mouth shut. In the end, Sable did not pass the behavior evaluation and was therefore not approved for adoption. The Humane Society contacted all the possible rescue organizations - they were all full and could not take Sable. The H.S. even had the police come out and test her for police work, but they found her to be too environmentally focused so they couldn't take her. All roads were leading to a dead end, pun intended.

I just couldn't let her be put down, so I contracted with the Humane Society as my own rescue organization. They spayed her and signed her over to me. I'm now searching for a home for her. 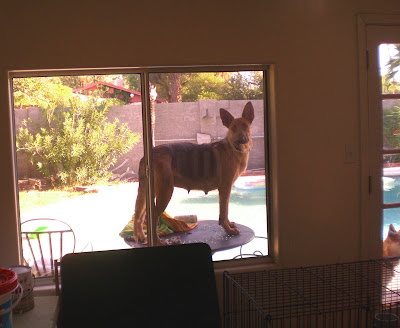 Sable on a table

Since coming back to live with us about two weeks ago, Sable has seemed to regress instead of progress in some areas. She is no longer tolerant of Frankie (which may not be entirely her fault as he is no longer tolerant of her, either). She still likes Georgie. I now keep two separate dog households going - which is tedious and somewhat difficult. Sable has also become very dog-reactive when we are out walking. I don't know if this is a symptom of her regressing or if it's just that with the cooler weather there are now more dogs out for walks. Either way, it's hard for me to control her when another dog is in the vicinity. I'm building up very strong arm muscles! On the plus side, she has not gotten up on the table since she's come back.
I signed her up for obedience classes that start on Monday, but I don't think I will be able to control her around the other dogs, so I'm going to hire a trainer to come to the house instead. I'm not a big fan of that kind of training, but I could use the help and I don't think her current state of reactiveness will be conducive to learning in a group class. I'm going to take Frankie to the class in Sable's place - maybe the structure of obedience will help teach him that we are a team out on the agility course and that he is not a one-man show.

I've got a potential home lined up for Sable and I'm crossing my fingers that it's going to work - I'm crossing them so hard that they are starting to cramp up. A friend of Pat's, a big strong guy who likes to run and hike, is going to keep Sable at his house while we are in Brazil. If he likes her, he will keep her. He has no other dogs, so this would be a good situation for her. He lived with a friend of mine for a few months when he first came back to Phoenix. She has 2 large, somewhat crazy, kind of naughty dogs and he loved those dogs, so perhaps Sable is his type of gal. Wish us all luck - me, the friend and Sable - that this situation will work out!