The NHL Used To Be More Fun

The hockey season has started! Not surprisingly, my crappy Coyotes are 0-2 so far. Luckily, pre-season doesn't really count. It won't be long now until I'll be getting even less sleep thanks to DVR and the Center Ice package.

But no matter how much I love to watch hockey, it's no longer the same. It was way more fun when I used to be a Pack girl (originally called the Puck Patrol). Back then I got to be on the ice during intermissions, in the stands shooting t-shirts from the gun during TV timeouts, and I was thrilled to be a part of it all. I was Pack Captain my second season and then in the middle of the season, the game ops coordinator left and I was offered his job. I begrudgingly hung up my uniform. I maintained my duties with the squad, but I also oversaw all the promot 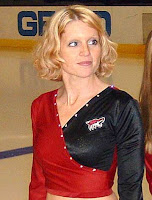 ions, pre-game activities and intermissions. I ran around with a radio and looked important. And most exciting, since I didn't have to be in the stands cheering with the crowd, I got to watch every game from the glass in the Zamboni tunnel. It was AWESOME. (Too bad the pay was so low that I had to take out a loan to pay for the gas to get to the arena).

But then the NHL lockout came and with it a big fat layoff for me (also known as a financial reawakening). When the lockout ended, all the management in the organization changed and I was not brought back. My bank account was happy but my heart was sad. And though I still love hockey and I love the Coyotes...it's just not quite as fun.

This picture is from the inaugural Puck Patrol season. Wow, these uniforms were ugly! We didn't take professional photos the first year. The whole Puck Patrol program was treated like a red-headed stepchild by the organization. This was at Phoenix's Saint Patrick's Day parade with Charlie Simmer, the color analyst for the Coyotes back then: 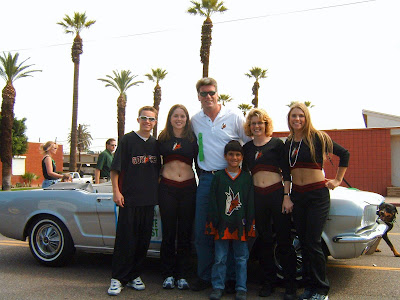 Things got a little better the second year- we got much cuter uniforms and had official photos taken for the website: 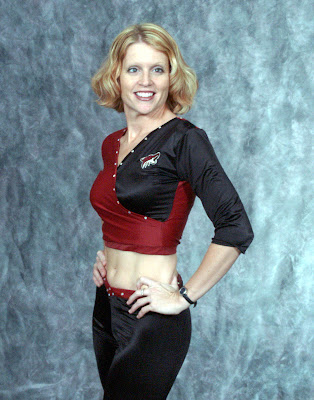 This was at a promo event for something or other. I loved these red uniforms. I still have one if you want to borrow it for Halloween: 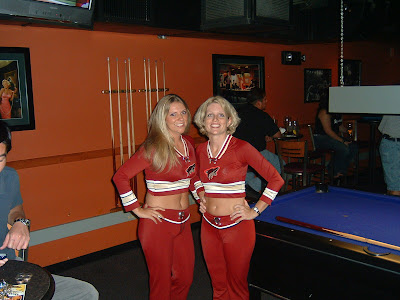 Sorry to hear about your Coyote woes...

I'll have to admit that I've not kept with with my Wings as much as I could have since I've moved away from Michigan...

Hey there 2halves-
As long as you like hockey - it's all good by me! We can't all back the losers!

I certainly got to see a lot of live NHL for free... I miss thoose days. Now I feel had for paying to see Phoenix Coyotes, the best team on the ice...for 40 minutes.

OMG. you ar smoking hot jill. I might have to print these pics and post them on my bulletin board....yes, I want to borrow the costume for halloween!!!