Are You Aware of the Ongoing Economic Crisis in America?

On Friday night we went to the Arizona State Fair where we, along with a large number of other oblivious Arizonans, shelled out boatloads of money for low class entertainment and food on a stick. We spent about $135 for entry, rides, games and food. And I do believe it was worth it, economic crises notwithstanding.

Pat and I were accompanied by our friends, Laura and Craig, who are not related, but might have been separated at birth: 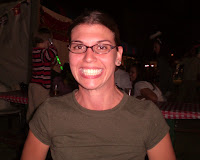 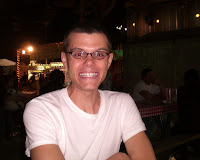 We started off with watching the car races to appease Pat. They were racing these old beaters, whose last step in life will be in next week's demolition derby, in a figure 8. It was a lot like watching real traffic as the cars sped in front of oncoming cars to cross the middle of the 8. Car racing is not my thing, but the boys enjoyed it very much. Craig's opinion: "That was tremendous!" Not what I'd expect from an intellectual giant like him, but to each their own.

After that spectacle (which was free with the price of fair admittance!), I spent the bulk of our money on ride tickets. We wasted a lot of money on the Ferris Wheel, which is dull, dull, dull, but since Pat isn't big on rides and it was the one ride he would agree to, I played along to maintain group cohesion. While in line for the Ferris Wheel we ran into our friends, Karissa and Eric, which was worth the price of the ride. We also used the Ferris Wheel as a meeting place for David and his (sort-of) girlfriend. Aren't we a happy group? 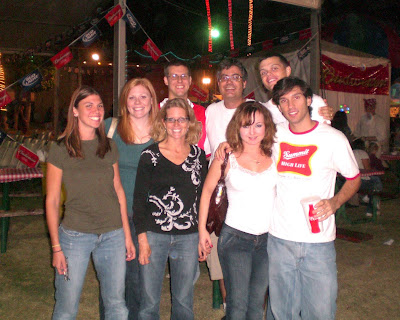 I spent the most money on this crazy bungee ball ride. They strap you into this ball and then slingshot you up 253 feet at 100 mph. I'm all about the risk-taking! It was crazy fun! You went up so fast that you had no way of keeping track of distance. All you could see was the black sky - it was quite disorienting. I loved it. Karissa the Brave went with me. 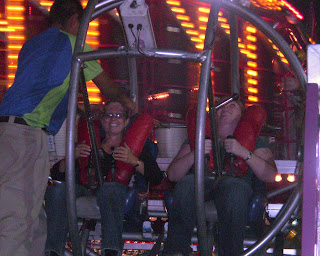 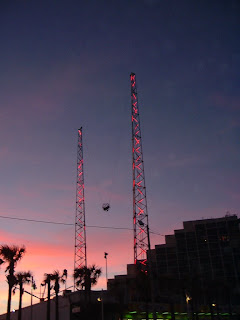 Remember, I'm all about the risk-taking: After the rides we ate fair food. And we didn't die. Or even get sick. Laura had an eggroll on a stick. It's not a true fair experience without something on a stick. Craig tried Spam for the first time in his life. David got a brick of french fries- it was shaped like an actual brick which was very strange and very greasy. I stuck to the basics and got an italian sausage with fries that came in a basket, like fries are suppposed to do. Unfortunately no one in our group got any fried twinki 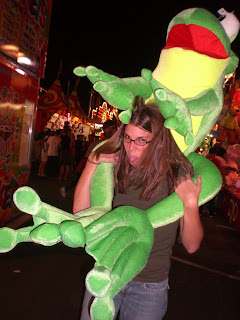 es or similarly unique fair food. We might have to go again...

The last part of the evening was spent playing games on the midway for the thrill of winning big prizes. Craig got lucky, or more likely, Craig displayed his amazing skill at throwing a wiffle ball off an angled backboard into a laundry basket and won this huge frog for Laura. I suck at games which makes me sad because I really wanted a huge stuffed animal with which I could torment Frankie and Georgie. Alas, no such good times in my future. We might have to go to the fair again, but I don't think that would be fiscally responsible!
Posted by Diamond Girl at 5:15 PM

After 4 years with my pal the frog, I donated him to Goodwill today. I'm so glad I was able to find this very old post though. What a fun night!