I Still Haven't Found What I'm Looking For

I spent this week on a quest for motivation, connection and an adrenaline rush. I failed on all counts. I thought I had the adrenaline rush in the bag, but there were two problems:

1) It's not called adrenaline anymore, according to a friend of mine who spends most of his free time memorizing Wikipedia. He would like to share this link with you: http://en.wikipedia.org/wiki/Epinephrine

2) Apparently it was too windy today for skydiving. We had made plans to spend a lot of money for a brief thrill at Skydive Arizona. As I pulled into the parking lot of my friend's apartment, I got the call that we had been canceled. Crappy... I got up at 6:00 am on a Saturday for nothing.

I was holding out hope that the adrenaline, er, epinephrine rush you're supposed to get from jumping out of a perfectly good plane would help cure my lack-of-connection / lack-of-motivation blahs.

But instead of this being me: 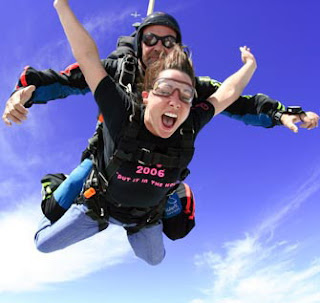 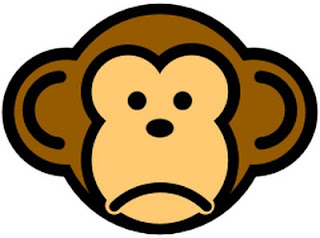 Now I'm off to play some hockey. Maybe playing tough with the big boys will make me feel better.

Updated at 11:15 pm to say: I didn't get to play hockey, either. I was subbing for Pat's team because they were only going to have 7 or 8 players. 11 players showed up, so I was not needed after all. Another wasted trip. Today really sucked.

I did get to eat sushi with my NFBF and watch the Coyotes win their home opener, so I guess that's my silver lining.
Posted by Diamond Girl at 5:51 PM

We were wondering about the high wind factor. Better safe... I'm feeling your pain and resume work on Monday. BLAH. Vacations are so much more fun!