We Interrupt Your Regularly Scheduled Program...

I'm going to take a break from the fluff and lightness that I usually provide you here at "A Little Diamond" to talk some politics. It's generally my rule to avoid politics because I know I'm not as well-versed as I should be and could be, but Proposition 102 is enough to break me from my political moratorium.

For those of you not in Arizona or for those of you are, but who are even more ill-informed than I am, Prop 102 is having us vote on whether to amend the Arizona Constitution to state that "Only a union of one man and one woman shall be valid or recognized as a marriage in this state.” We voted on a similar initiative in 2006, but apparently they didn't believe our NO then, so we have to tell them again.

Proposition 102 is being touted as the Marriage Protection Amendment. Protect marriage? From what?? How is marriage being threatened by two people of the same sex being in love and choosing to spend their lives together? I'd like the proponents of Prop 102 to know that homosexuality isn't contagious and it isn't a personal threat to you or your marriage. If your next door neighbors are gay, it's not going to ruin your happy heterosexual marriage. Nor is it going to ruin the futures of your precious children's happy heterosexual marriages, if that is what they choose. Your marriage is safe, really!

You know what actually threatens marriage? Divorce! Divorce between that same "one man and one woman" that are narrowly defined in Prop 102. Homosexuality is not the threat.

And you know what else is really dumb about this proposition? Gay marriage is already illegal in Arizona and will remain illegal despite the outcome of this election. So Prop 102 is just there to say, "We not only don't like gays, we REALLY don't like gays. So go away and don't come back to this completely intolerant state."

Now back to your regularly scheduled fluff and light... pictures from Brazil!!

When we were in Rio, we went to see a Fluminense game at Maracana Stadium. This is one of the biggest soccer arenas in the world and is home to the 2014 World Cup. Brazilian soccer fans are nuts! The whole experience was awesome! Lots of singing and dancing and cheering and chanting. Since the arena is so big, there are plenty of open seats so the fans move at half time to the other side of the stadium so they can always be goal-side. For the rest of our Soccer Troupe team - the five of us are very sorry we left you stranded during playoffs. But we weren't completely skipping out on soccer...see??? 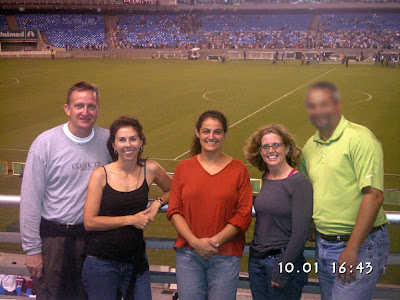 Thank you. Many of my blogging friends have posted the opposite stance...and I must tread lightly to preserve friendships. It's heartbreaking.

Couldn't agree more -- like Elaine, I've got my share of folks that have the opposite stance -- but refreshing to see your emphatic remarks. I liked you a lot before -- but, I like you even more now!! :) :) :)

totally agree and if i wasn't already married i would marry you :)