Conquering the World in One Day

Can the world be conquered in a day? Why, yes, it can! Can I prove to my blog-readers that I am every bit as nerdy as they suspect? Why, yes, I can do that too!

You may have noticed that I have a lot of traditions. One of my favorites is the New Year's Day Day of Strategery. Every New Year's Day a group of us gets together for a day-long game of strategy in an attempt to be that year's Conqueror of the World.

For the past few years we have played 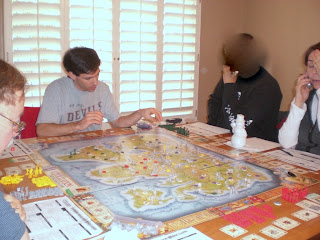 Civilization, which is an empire-building game of land use, supply discovery and management and not surprisingly, civilization building. As the civilizations progress, you move through eras. We've played for up to 9 hours in one sitting and have never made it to the modern era. New Year's Day 2008, with the help of the supply-trade-genius, my NFBF, I was the Conqueror of the World - a title I held for a full year.

This year we played Diplomacy, a game of negotiation and pure strategy.

Some reviews of the Diplomacy include:

"You will hate this game if you hate lying. If you stink at poker, avoid this like the plague. If you can lie through your teeth, and enjoy having people do your work for you just to kill them, then this game is for you!"

"The best game that no one ever plays because they want to keep their friends so they still can play other games." 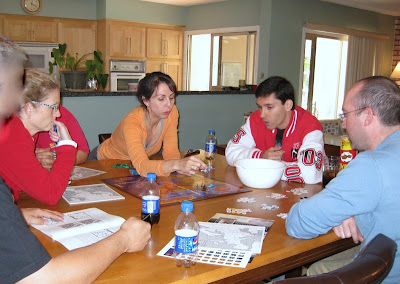 And my favorite: "If you can play the game hard and walk away smiling, you have a group with players you should cherish."

In Diplomacy battles are not won or lost based on the roll of a die like in Risk or Civilization. Battles are won based on strength of arms and the strength of your allies. Be forewarned if you ever play this game, however, that the battle of learning the rules can be the bloodiest battle of all. For us, it took three hours and almost came to blows. (Seriously.)

But we persevered through the somewhat bumpy learning process and played a full-out diplomatically, strategically, mind-bending game. I did not conquer the world this year but I DID backstab both of my allies and shake things up quite a bit. This was quite fun since I'm usually the tried and true, honest-to-the-core partner that everyone can trust. And we did play the game hard and walked away smiling, so I know I have a group of players I should cherish. And I am devilishly, smirkingly awaiting next year's rematch against these cherished players! New Years Day 2010 is the day I will regain the Conqueror of the World title!

The title this year belongs to my NFBF, the Master of Strategy (and king of the blurred out face): 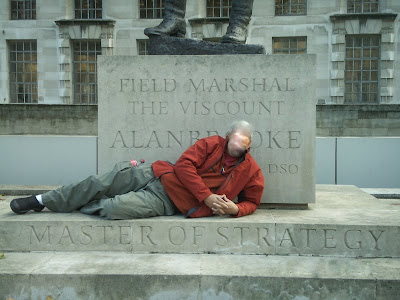