Remember the agility trial two weeks ago? If you recall, Frankie had a bit too much of the crack and was a little (read: A LOT) squirrelly. This was the last run of the day and you can see by my expression that I was not at all amused by his refusal to accept that agility is a TEAM sport. 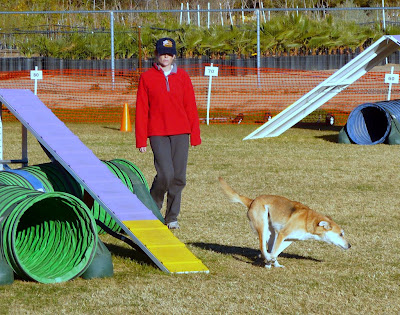 I took Mo to the trial for some much-needed socialization. Slo-Mo is still hesitant with strangers and stand-offish with some dogs. She has slowly acclimated to life at my house, but she definitely needs to get out and see the world and know that it's not so scary with me by her side. I am pleased to report that Mo did fabulously at the trial. She was accepting, though wary, of my agility friends. She allowed other dogs to sniff her and attempt to play with her with nary a growl. She didn't freak out or make any complaints when left alone in the x-pen while I ran Frankie. She sat nicely under my chair as I watched the rest of the trial. YAY for Mo!! I was so very proud of her. 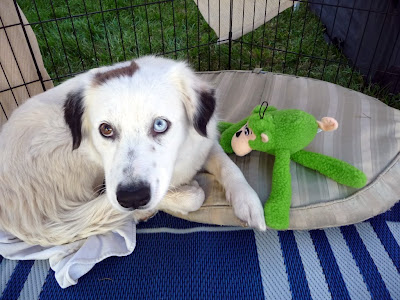 Chillin' with her cool green monkey at the trial
We are currently taking beginner obedience class. She is doing as well as can be expected for a Slo-Mo. "Sit" was very hard for her to learn because she does not like being physically manipulated. If you press on her hind end, she runs away and hides. She's not that into treats so luring was not doing it for her. Finally, I resorted to saying "Sit" every time she was about to do so on her own and gave her lots of pets every time. Two full days of this led to the light bulb moment. She finally figured out that if she wants those pets (which she really, really does), she'd better sit. YAY for Mo! "Down" is progressing just as slowly, but she has at least figured out that training is not a reason to run and hide. "Stay" is coming along a little more quickly.

Two steps forward, one step back. (Ha! That's one step for each leg!)

For some reason Mo does not like Georgie. This is strange because Georgie is the one dog that all dogs like. All my fosters, all the dogs at the park - they all like Georgie. But Mo doesn't. I'm sure it's a combination of alpha-girl dog stuff and a budding possessiveness over me. We are working on combatting this. Mostly the dislike is manifested as growling, especially when I'm on the computer with Mo stationed right at my side and Georgie tries to get to her spot under the desk.

Monday night after class, I was feeling pleased and proud because Mo and Frankie were both the best dogs in their obedience classes. I felt like I had the most awesome dogs in the world!! Yeah, right. My feeling of pride was immediately shattered when the growling escalated into a full-fledged, out-for-blood fight. Mo attacked Georgie for, I'm guessing, getting too close to the cat (??). I'm not sure, but it wasn't pretty. I separated them but the growling lasted for a while longer.

Frankie and Georgie were on edge for the rest of the night. Though the situation was no laughing matter, this picture is a laughing matter. Mo was right next to me when I took it. She wasn't growling at the time but I'm sure she was giving them the old stink-eye, which apparently was very frightening! 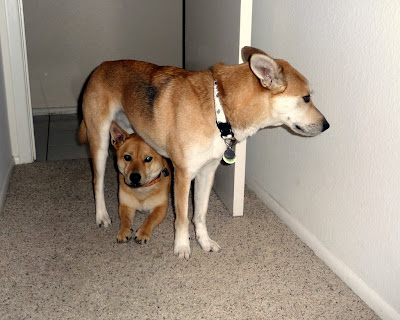 Scaredy-Dogs in "hiding"
I have to say that if I'm looking for a place to hide, I don't think that underneath Frankie, the wussiest of wuss-dogs, would be the most logical spot. However, Georgie hasn't yet mastered logic. And poor Frankie, who is too tall to hide under Georgie, did his best, patent-pending "you-can't-see-me-because-I'm-invisible" trick originally seen here.
Posted by Diamond Girl at 8:15 AM

" "Sit" was very hard for her to learn because she does not like being physically manipulated. If you press on her hind end, she runs away and hides. She's not that into treats so luring was not doing it for her. "

I may be preaching to the choir here, but have you tried clicker training with her? It's basically what you ended up doing anyway. You wait until she does the desired behaviour, mark it (generally with a click but some people use marker words) and then reinforce with treats or pets or playtime. Once she's offering it reliably to get the reinforcement then you add the cue.

it's a really good way of training dogs who don't like to be touched because you don't have to touch them!