The Rest of Saturday

You didn't think that after doing the race on Saturday that I went home and relaxed for the rest of the day, did you? Yeah, right.

After lunch with Pat, I took Frankie to agility practice. It was just practice so he was awesome!! An agility super-star!! Don't believe me? My friend Sheryl was there. She is my witness! He was also quite amazing at class last Thursday, too. There were at least 6 people there who could vouch for this! I'm telling you, he really is good at agility! REALLY! If I could only pinpoint the disconnect between practice and trials... 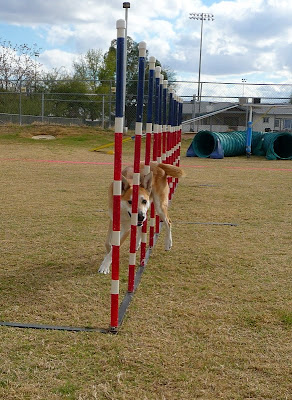 All of a sudden Frankie loves to weave! Where he used to fly right by the weaves without even seeing them, now he rarely misses an entrance. Look at that smile on his face! 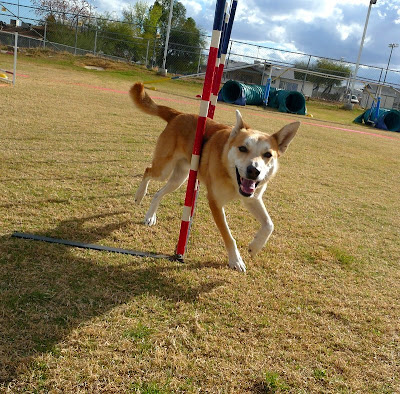 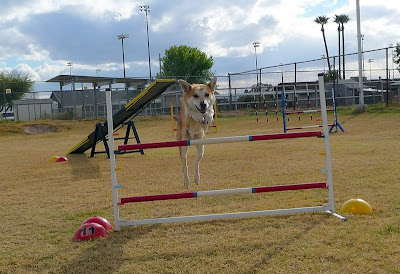 He always jumps this way. 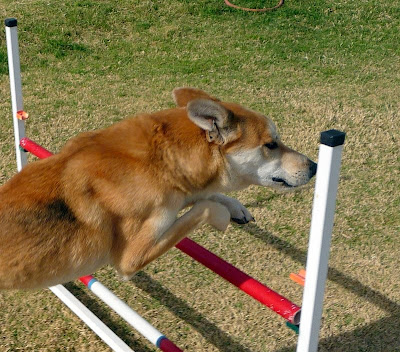 Mo got to come to practice, too. Last week I took her to Jim to see what he thought of her agility possibility. We worked on jumps (4" only) and, as expected, she was very slow to do it and very slow to warm up to Jim. But by the end of the session, her tail was raised a bit and she was going willingly through the stanchions. On Saturday she was really happy to be there. She was running around the yard with her tail high and wagging. She did her jump series very nicely. I think she was starting to figure out what I was asking her to do.

We haven't tried her on the contacts yet. Jim wants to test her 3-legged balance first. He noticed that her right front foot is flattening out and is turning sideways to accommodate the weight shift. He is worried that might affect her ability to do contacts and even tunnels. We'll see. However, she was quite curious about the A-frame. 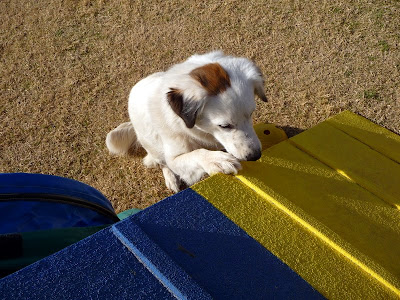 This might have been because I was sitting on it. :) 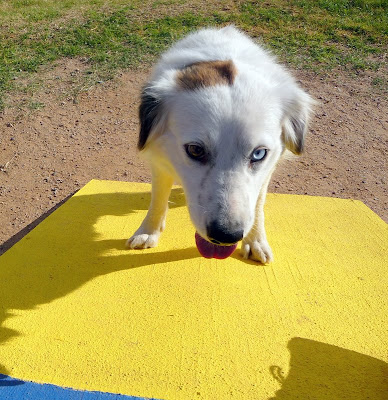 After agility, I took Mo home and picked up Georgie and I took the tan dogs hiking. We left a little later in the afternoon than I wanted to and there was a storm blowing in. We barely made it back before full dark. I probably shouldn't have stopped to pose the pups for pictures, but they just looked so cute!! And my knee was starting to hurt, so the break was welcomed. This is the only shot I got where they were both looking at me. Georgie looks cute, but Frankie looks a little scary, like maybe he really IS a coyote. Or some sort of wild animal who wants to tear into you and rip you apart. RRRrrrr... 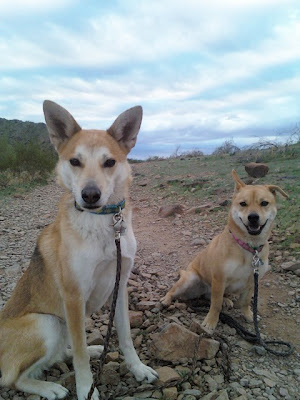 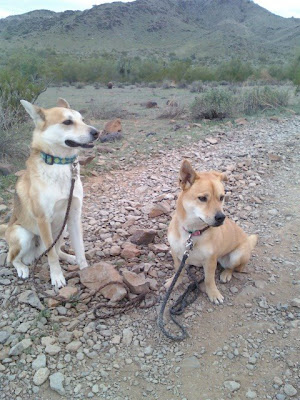 Ok, after all that, I did rest on Saturday night. My NFBF, aka the nicest guy in the world, dropped off some pizza for me (mmm, Spinato's) even though I turned him down for a hockey date. I spent the evening reading my book club book. I'm ashamed to say that I didn't finish it. 600+ page books are just too much for me, I think!
Posted by Diamond Girl at 5:00 AM

Let me second that, mmm Spinato's! I also had some of that on Sat. night. I also did not read the book- same reason. But...I took a 3 hour nap on Saturday and spent the evening browsing Target. Do you see the difference between us?

omg, Frankie is SOOOOOOOOO cute jumping! this makes me want to go home and hug my dog. (since I'm cleary not working anyway!)