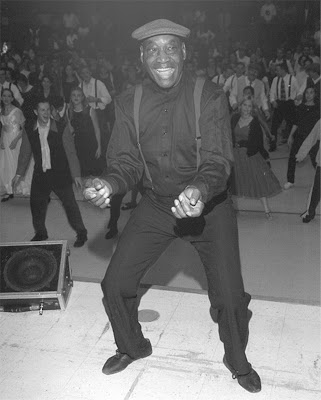 Frankie Manning died. I am sad. I am at a loss for words to express how much of an impact he had on my life.

Frankie had more charisma, energy and enthusiasm for dancing and for life than anyone I have ever met. He was an amazing man! He danced til the end - at age 94! I love Frankie!!

If you don't know, Frankie Manning was one of the original Lindy Hoppers at the Savoy Ballroom in the 1940's. In the 1980's and 90's he brought the Lindy Hop back, traveling all around the world teaching workshops. You can check him out here in a 1941 movie called Hellzapoppin: http://www.youtube.com/watch?v=mTg5V2oA_hY.

Frankie Manning came to Phoenix to teach a weekend workshop every year for the past 12 years or so. It was at Frankie Manning Weekend 1999 where the photo above was taken. It was taken right after Pat proposed to me. Our dance troupes had performed a few routines and in the last routine, in front of 300 people, Pat stopped dancing, got down on his knee and took a ring out of his pocket. Then Frankie took the stage and led us all in the Shim Sham. That old man sure could move!!

Frankie also taught at Swing Camp every year. For seven straight years we went to Catalina Island the first weekend in June. It was an awesome tradition and it was a blast. The instructors would perform at the big Saturday dance. Even in his late 80's Frankie was doing lifts. I'm telling you, that man was the everything!

I miss the swing days. And now I miss Frankie. His infectious laugh and awesome smile will forever be an inspiration to all of us who met him and learned from him.

If you listen closely you can hear it. The laugh.

wow, he just looks like he's having so much fun in that pic. kind of makes me wish I was in Heaven right now. (NOT feeling suicidal, thank you; just to welcome the dude!)