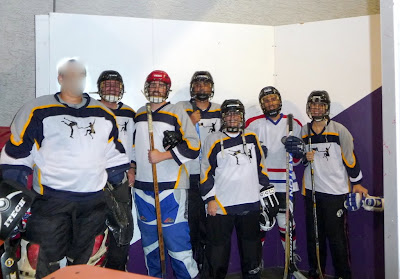 NFBF, Brian, Richard, Pat, me, David, Irene
We have played two games so far. The first game was against the league champions from last session, which was probably not the best way to get back into a sport that none of our team has played for five, six or seven years. Not surprisingly, we lost. The score was 7-2. 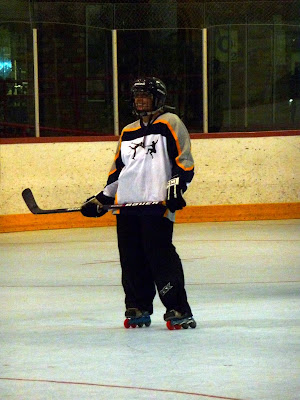 But don't we look good?! 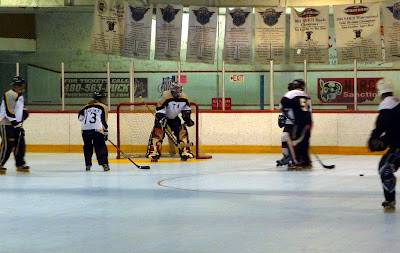 The second game went quite a bit better. Well, for me it went WAY BETTER because... I SCORED A GOAL! Woo hoo! I'm pretty sure this was only the second real goal I've ever scored in hockey and that includes both roller and ice! Two goals in five years of playing really is kind of embarrassing to admit. But it was quite exciting last Thursday night! Then, right after I scored, I got a pretty assist to Pat. And then we won 3-2. Yippee!!

Right after that game, we played soccer and lost 20-3, so the hockey goal and victory were tempered a little bit by that sad thrashing.

Good news...bad news...interesting news for this week's game. The bad news is that the NFBF has a conflict and can't play goalie for us. The good news is that Jamie is a super-star (a slightly crazy super-star) and has agreed to play goalie for the games that the NFBF has to miss. Hurray! The interesting news is that Jamie has never played hockey before and thus, has never played hockey goalie before. Jamie doesn't even skate! Like I said, he's slightly crazy! The plan is to dress him up in NFBF's gear, push him out to the net and then play lots of defense!

Jamie did get one practice session, which was mostly to teach him how to put on all the gear. He was amazed by how much gear there is for a goalie. He's used to playing soccer, which is a very low-maintenance sport. :) 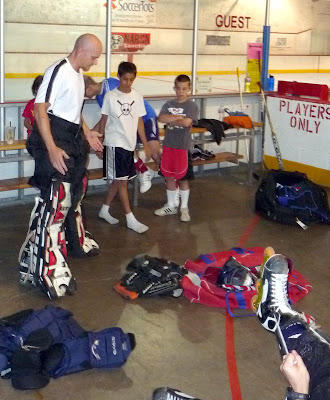 It took almost the whole NFBF family to dress him. 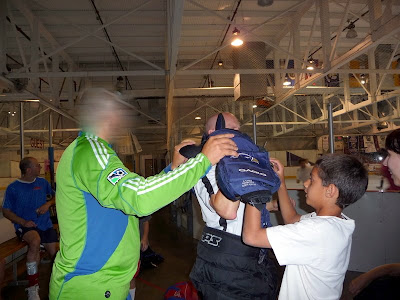 And then we pushed him out to the net and practiced taking shots on him. He did great with the low ones, but when David shot them high...well....yeah...those all went in. 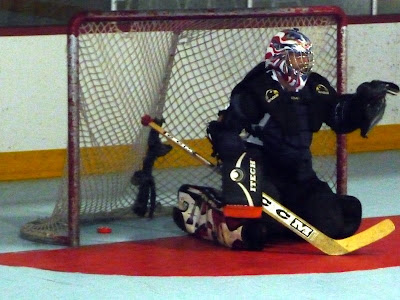 Last I heard, his objective for Thursday's game is to do better than our soccer team did last week, which means he can let in 19 goals. Of course, that also means we have to score at least 3.
Wish us luck!
Posted by Diamond Girl at 11:00 PM

This NFBF thing still has me confused!!

Just stop the puck when that dude is not there.