On Sunday, I went hiking with some of my agility friends at Thunderbird Park at 59th Ave and Pinnacle Peak. (We met at 5:00 am. Wow - that is early!) By the time we were finishing the loop, 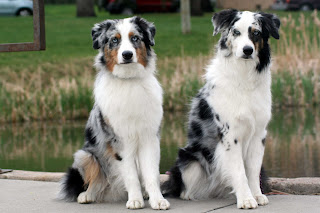 the trail was very busy.

Vickie took the lead with her two gorgeous Australian Shepherds, Conor and Kaylie, pictured here. These dogs are truly striking!
While we were hiking, two women passed by and said to Vickie, "Oh, what beautiful dogs!" As they then passed me, they called over their shoulder with considerably less enthusiasm, "And your dog is cute, too."
About 10 minutes later, we passed another couple who said to Vickie, "Oh, your dogs are so beautiful!". As they then passed me, they said, "And your dog is cute, too." Exact same verbiage as the other ladies.
I wonder if it is more insulting to be an after-thought or to be ignored altogether? Aw, poor Georgie. :) Sometimes you're just outclassed in the looks department. She may not be as pretty as those Aussies, but she is cute enough for me! 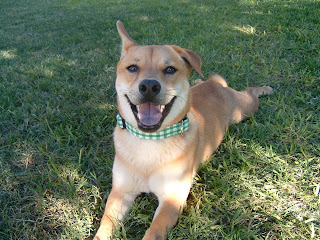 Despite the not-quite-genuine compliments, I think this hike was very good for Georgie. I have been working with her and she is very slowly getting over her belief that all humans are VERY SCARY. She remembered Terri and greeted her with hugs and kisses. She was friendly to Vickie and Cindi. It helped to have Vickie's dogs around, as Georgie loves dogs. A couple times she got spooked out by some VERY SCARY people - who to me looked exactly like the other people who she considered not scary, but must have had some evil dog-hating aura about them. One couple went by that caused her to put her tail between her legs and jump about a yard off the trail. But for the most part, she did very well with all the people we passed on the trails. When we stopped for water, she even tried to join a man who hiked by. Too prove her fickleness, however, when the same man passed us on the way down, Georgie judged him as VERY SCARY. Perhaps his backside was friendly and his frontside was scary? Poor Georgie.
Posted by Diamond Girl at 8:10 AM

That's why you need a Border Collie...