Yesterday I Got So Old I Felt Like I Could Cry

Thanks to two great friends, I went to see the Cure concert last night. Nicole, friend #1, was gracious enough to be seven months pregnant, not sleeping at all, having long days at work and thus ending up too tired and grumpy at the end of the day to want to use her Cure concert tickets. (Isn't she thoughtful??) Jamie, friend #2, is spontaneous enough to say yes when I call him at 5:30 pm to see if he's up for a concert after our 6:20 pm soccer game.

The Cure is the one band I missed seeing back in the day when I was young and cool. Better late than never.

Right when we walked into the venue, I looked around and just couldn't believe how old everyone was. They were all OLD, you know - the same age as me. I can't believe how old I've gotten. When did that happen? When the band played In Between Days, which starts with "Yesterday I got so old", Jamie and I just looked at each other and said, "Yep." That pretty much sums it up. I no longer feel any need to look up old high school and college acquaintances, because I'm pretty sure that this crowd was a cross-section of them all. They are just as middle-aged and ordinary as I am.

Of course, there were a lot of freaks there, but not in the male eye-makeup wearing manner that you might have seen at a Cure concert 20 years ago. I'm talking more along the lines of this guy: 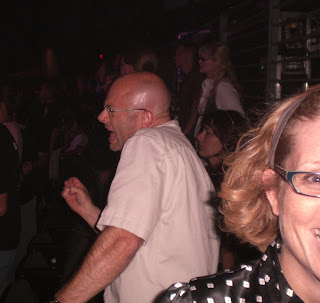 He sang every song at the top of his lungs and danced wildly all night. I wonder if back in the day he had teased hair and lipstick like Robert Smith? I'm guessing yes and that it kills him that male pattern baldness took over. However, he was having the time of his life and I made Jamie pretend to take a picture of me so that I could capture his pure joy on camera.

Then there was this guy: 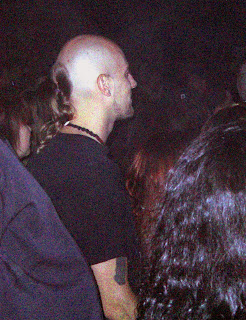 Yes, that IS a pony tail growing out of the back of his bald skull. His likeness to Riff Raff from the Rocky Horror Picture Show kept me entertained most of the night. I couldn't get a good angle shot of him, but seriously. They are twins.

And lastly was this freak: 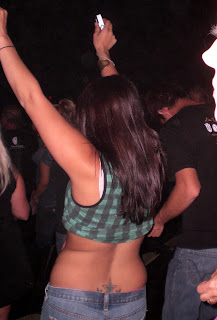 Ew. She was in Row 31. THIRTY ONE rows away from the stage, yet she thought flashing the band would be a good idea. She also had on this necklace. I'm pretty sure she was at the wrong concert.

The tickets that we bought from Nicole were awesome. If you go to the Dodge Theater and you can't get front row, you should definitely get Row 32 in Section 4, especially if you are short. It's the last row on the main floor and the sound booth is right behind you. When everyone in the 31 rows in front of you stands up, you can stand on the seat of your chair and lean against the wall of the sound booth and see everything perfectly! Here's the view (If you click the photo to enlarge it, you'll get a better idea): 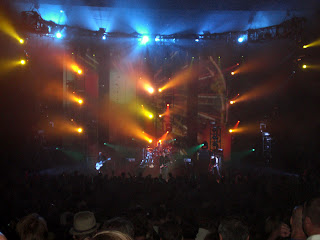 I can't believe how good Robert Smith sounded. His voice has not changed at all. The band played for 3 1/2 hours with only a very little break for the stupid encore cheering tradition. They played a lot of the old stuff, but not necessarily the old stuff I really wanted to hear. Missing was Love Cats, (I really wanted to hear that I am "wonderfully, wonderfully, wonderfully, wonderfully, pretty") Let's Go To Bed and Why Can't I Be You? There was no keyboardist, so these songs might not have been quite the same anyway. I also would have liked to hear Letter to Elise. The songs I was pleased to hear were the standbys of Boys Don't Cry (though I'm pretty sure he messed up the lyrics), Hot, Hot, Hot and Killing An Arab. And thankfully they did not play Friday I'm in Love.

Of course, they did play Lovesong and here is Robert Smith telling me that he will always love me. Awww.
Sorry about the crap audio, you can only do so much with a little camera.

Overall I would say it was a good show. I'm very happy that I went. I can now check off "Be in the same room as Robert Smith" from my list of things to do before I die.
Posted by Diamond Girl at 7:28 PM

I would like to say that I was not grumpy. Just tired and pregnant :)

I would also like to order that necklance on the double.

I forgot to check out the necklace. I'll go back. You could have invited all those wackos over to Graham's Central Station- where I was (read blog). They would have fit it, freak flag and all.

listening to the cure on pandora and typed in the lyrics to a song and got your blog...funny.

i'm 42, saw them when i was 25. you should thank god the keyboard player wasn't there. he stared at me (row 3) the whole time and would not stop. i still have my hair, not like the guy having a weird bromo orgasm in your photo. i'm still cool, but yes...we are getting old. gotta pack lunches for my four kids and check homework...