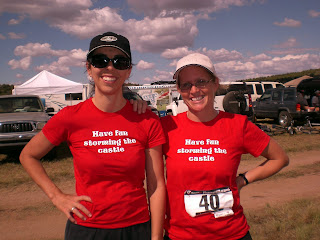 Wow! Who knew that hiking and biking and running and orienteering non-stop for five hours could be so frickin' fun? I hate running - it's boring and pointless. I hate biking - it's scary and I'm bad at it. I LOVE adventure racing! Go figure.

Saturday was the Gilmore Adventure Race in Prescott. Our team name was Storming the Castle. If you have to ask what that refers to, I'm sorry, but you and I can no longer be virtual friends. Warning - the rest of this post is a long, detailed and potentially boring account of the race. If you aren't interested, it's enough to know that I HAD SO MUCH FUN!!! You have my permission to scroll down and just look at the pictures. 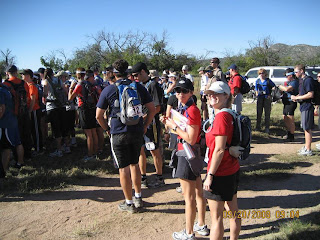 The race was divided into 5 checkpoints - 1 by foot, 4 by bike. There were 2 mystery events and a boot-camp type wall to scale at the finish line. To find the checkpoints, we were given a topo map and coordinates. We had to plot the coordinates and then find the destinations.

The race started at 9:00 am. The hike checkpoint was at the top of a mountain. We took a trail up but made the (incorrect) decision to head down the mountain via a wash. This proved to be quite a bloody task as the mountain was covered with bushes that wou 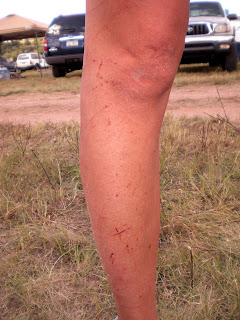 ld tear your skin for just looking at them funny. This is Irene's leg after the race. So, the going was slow and painful, but we finally got back on track - somewhat demoralized and convinced we were in last place. Adventure Racing Lesson #1: If there is a trail, even one that appears to be a longer route - TAKE THE TRAIL!

The first mystery event was to put together a puzzle of numbers. Irene and I rocked this challenge and were happy to see lots of people at the puzzle stop. We actually beat a lot of people there (surprising after our hike-down-the-mountain debacle) and then passed a couple of teams doing the puzzle.

We plotted our next two coordinates, hopped on our bikes and raced off to the next checkpoint - B1. I was very pleased that the route to the checkpoint was a dirt road - even I can ride on a dirt road! This B1 checkpoint was easy to find at a crossroads. We turned at B1 to head toward the next checkpoint. We kept bearing left as the road on the map showed and we kept ending up in dead-ends at the entrances to people's homes and ranches. The road was supposed to continue underneath a railroad tracks. We could see the tracks but there was no way to get to them. WTF? Lesson #2: Don't trust the map! New roads are built all the time and the maps might not be updated to show this!

Irene was in charge of the plotting and map-reading, as she is much better at this than I am. When I took a look at the map, I saw that the point she plotted was not exactly on the crossroads - the road appeared to be another 3o-40 yards past B1. Irene had figured that her plotting was just a bit off. I suggested we assume her plotting was correct and thus we needed to go past the first checkpoint and look for another road. By this time there were about 6 other teams who had come up to where we were stopped to discuss and look at the map. We were nice and told them that all the turns ahead led to dead-ends. We left them to make their own decisions with that info and retraced our route - and yep! There was the correct road just past the first checkpoint. Tricky little scoundrels those course-makers were! Lesson #3: Trust your plotting!

Getting to the next checkpoint, B3, was torturous. The road was uphill, extremely washboarded and we were riding against the wind. Have I mentioned that I hate bike riding? We beat most of the teams we had been bunched with to the checkpoint, so we were first to the mystery event. This event involved a ceramic tile with strings tied to each corner. We had to dip a coffee can into a bucket of water, place the can on the tile, and with each of us holding a string in each hand, we had to maneuver the tile and can to a water jug. The trick was that the tile had to be centered over a long, windy rope and if the tile swung too far over the rope, we had to go back and start over. If you spilled your water, you had to go back and start over. It took about 5 trips to fill the water jug. Well, it took us 6 trips because I got antsy right at the end of trip 3 and spilled our water can. Frick! There were 5 available event stations. When we were working, the other four were filled and a line formed with teams waiting their turns. It was awesome to know we were ahead of so many people!

Irene quickly plotted our next two checkpoints. Did I mention that she is a mapping genius?? B4 was the next stop. There were 3 ways to get there. The easiest route was to go back down the hill and take a path that went straight along the railroad tracks. Whee!! Down hill was nice. We got to the path by the tracks and it was gated and padlocked. Ergh. Event rules stated you cannot go through a locked gate. So we continued on to the second route. Frick! Another locked gate!! The options now were to go back the 2 miles we'd just come from the mystery event (uphill and against the wind again) or head back to our transition area and try to come at the checkpoint from the back. We talked to a few other teams in the same predicament and we all headed back to the transition area. We were able to get to B4 that way, but we went miles out of our way. If we had known what road we had intended to take ahead of time, we could have seen that those roads were locked and it would 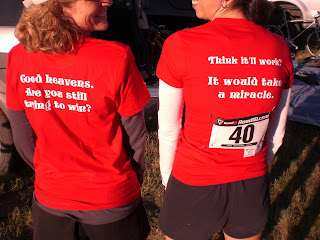 have saved a lot of time. Lesson #4: Plot all your coordinates at the beginning! And then remind yourself of Lesson #2: Don't trust the map!

The route to the checkpoint was a little trail that was really hilly and very sandy. I walked my bike a lot. I hate sand! Checkpoint B9, our final checkpoint, was miles away. We had to go back over all the hills we had just come over. Very depressing. By now it was 12:30. The race cut-off was 2:00. Irene was starting to get bummed out because we had wasted so much time. I kept pushing for us to just finish! I really wanted to go over that wall! Soon the path we were on turned into a rocky trail. It was horrible - I am horrible at steering and I swear I went over every large rock instead of around them. I finally got off the bike and ran along behind Irene. Thankfully she was pretty tired by then and wasn't going too fast. :)

Then we missed the checkpoint flag. The flag was in a tree at the bottom of a hill. I can barely ride my bike while looking at the path - there is no way I could ride it AND look up into the trees, so I saw no flag, only lots of rocks! Irene knew that we had gone too far when the path started to turn north. Another team came from the trail ahead of us and they told us that they'd gone too far and were coming back to search for it again. The good karma we threw out with helping people at the B1 checkpoint paid off. Lesson #5: Help others when they need it and the favor will be returned.

Thankfully, we didn't go too far out of our way, but Irene had really hit a wall. We stopped for a moment, she ate an apple and then started to feel better. I was starting to panic because it was 1:00 and I really wanted to go over that wall! And finish before the cut-off time, of course! We biked back to the finish line and we passed teams who were still heading to that last checkpoint. Yay! We weren't last! It took us about 25 minutes to get back to the wall and the finish line. 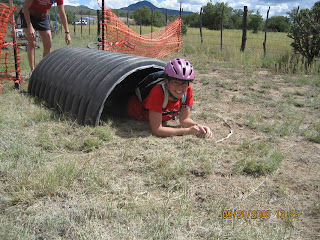 wall, we had to go through this tiny tunnel. Teams in front of us were attempting to scale the wall. Each team had a length of rope as part of their required gear and all the teams were using it -to varying degrees of success. I am very proud to admit that WE ROCKED THAT WALL! The boys in the background of this picture commented t 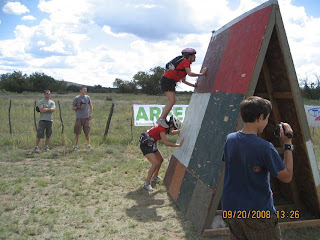 hat we did it faster than any other team and that we were the only team to not use a rope. They probably also mocked us for not bothering to take off our packs or our bike helmets, but I'm cool with that because I'm so proud of us!! Turns out the skills you learn in high school cheerleading come in handy sometimes! I climbed up to stand on Irene's shoulders, grabbed the top of the A-frame and hoisted myself up to a sitting position. She grabbed my foot and pulled herself up and over. Voila! We finished at 1:30 - ahead of at least a few other teams! Yay! Lesson #6: NEVER give up!

But "finishing" this race doesn't actually mean it's over! The second part of the race was freestyle navigation. We got another map with bonus checkpoints already plotted. You got extra credit points for each checkpoint you went to - as long as you returned by the 2:00 pm cut-off. We headed back out - Irene on her bike, me running. Did I mention I hate bike riding? The bonus checkpoints were really far away and widely scattered. We managed to get to one checkpoint that was up a dry creek bed - I do enjoy rock-hopping! It was then 1:45 - we made it back at 1:55.

Hooray for Storming the Castle! What an awesome experience!! This was the second-most fun I've had in a long time (because trapeze is seriously the most fun I've ever had ever!) When it was over I couldn't stop smiling! I was sooo excited! I can't wait until next year!!! Jamie - can I borrow your bike again next September?

Until then, I don't even want to see another bike!!
Posted by Diamond Girl at 8:01 PM

Yeah for you! I'm so proud of you for conquering the bike fears. You are bad ass.

Until then, I don't even want to see another bike!!

Does that mean no more Scrabble nights at your house? No more puzzles? Perhaps I could park down the street where you wouldn't have to cast your eyes upon my Schwinn.

What fun!!! I'm constantly amazed at all the crazy stuff you do! And hey -- did Frankie give you pointers on how to do that tunnel??