First of all, my husband is the coolest. As you may know, he isn't a dog person. And, yes, I love him despite this seemingly insurmountable flaw. Yesterday I asked him if it would be all right for me to get my next foster. Usually, I don't have to ask - but this time I will be going out of town for work for a few days which will leave Pat with the responsibility of the dogs. Pat is a gem and said yes, but reminded me of my promise that the next foster would be little. Sable was big and a lot of work and hard on the house and the yard and Pat really prefers a smaller dog...

To keep my promise, here is Hank Williams...all 7 pounds of him. 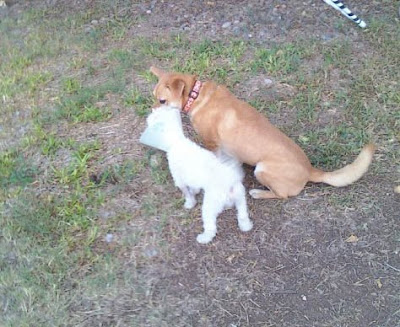 Hank Williams was brought into the shelter completely covered in ticks. The tips of his ears no longer have any fur - just lots of nasty infected scabs and he's way too skinny. The ticks are gone but the ears and the weight need to be addressed before he can go up for adoption. His recuperation should take about three weeks.

Frankie and Georgie like him, but they don't understand why he won't play with them. They keep trying to get him to play but he has no idea what to do. He has the cutest little bark - which so far he has mostly used to yell at the kitty. He 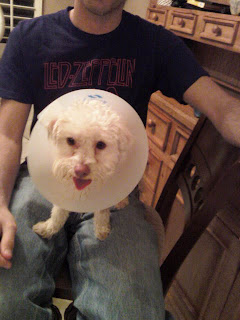 Last night I had some friends over and Hank Williams loved everyone! He's totally an indiscriminate lap dog - any lap will do! Here he is chillin' happily with David. When he isn't sitting in a lap, he's standing right next to someone's feet.

He's kind of like a kitty with the weaving in between your legs and being constantly underfoot. Pat accidentally stepped on him this morning, but that didn't deter ol' Hank Williams from staying right there. He followed Pat all over the house, then outside to get Pat's bike and back into the house - never more than 2 inches from Pat's feet.

what a cute little dog! and what a great name. you really ought to go into dog branding. I swear, these dogs would get adopted a lot more quickly based on your descriptions and oh-so-apt monikers :)