A Great Dane and Georgie

I don't know what Mo's problem is with Georgie. Seriously, all dogs love Georgie. She's the dog at the dog park that gets the other dogs playing. She'll wrestle if they want to wrestle. She'll chase if they want to chase. She's nice to all the dogs and she matches her play style for the type of dog she's 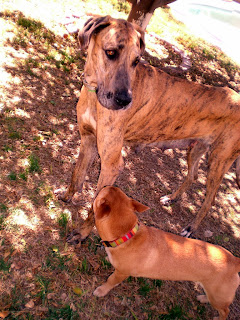 with. Yet Mo still hates her.

Last year I fostered a Great Dane named Mia. She had been pregnant and the two pups were dead inside her belly and the owner didn't know (??). She required surgery to remove the pups and her uterus was all infected. The owner turned her in with a male Great Dane. He went up for adoption and she came to me for recuperation after her surgery. She LOVED Georgie. They would wrestle and play for hours. I don't think either of them realized their difference in size.

Frankie loves Georgie, too. Perhaps a little too much. He gets jealous when she plays with other dogs or other people. Here is a video clip of Georgie playing with Mia. Frankie tries to get Georgie's attention back on him, but she just wants to play with Mia. Poor Frankie. My favorite part is when Mia puts Georgie's whole head in her mouth. :)

Mia got to be a model in the Arizona Humane Society's Compassion With Fashion event. She was adopted that day by a very nice woman from Scottsdale who has two labs and two acres. Nice!


While I was looking at videos, I found this one of Mr. Wendell. Mia was my largest foster dog, Mr. Wendell was one of the smallest. His name is my favorite of all the foster dogs I named - as a matter of fact, I think all dogs should be named Mr. Wendell from here on. He was with me because of skin issues that needed meds and puncture wounds that were most likely dog bites. He loved both Frankie and Georgie. Actually he loved everybody and everything. He was a happy little guy. I don't know who adopted Mr. Wendell, but he was gone before the AHS could put him on their website - so that is a good thing!

I remember Mr. Wendell -- he was the one that got away. remember how badly I wanted him? ah well, if there was Mr. Wendell Fenske there would be no Mr. Buckley ... anyway, lovely to see him again :)