I hope you've got some time... this is gonna be a long one. 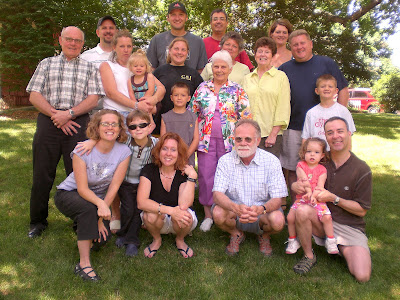 The Diamond-Maas Family (is it obvious that the
three tall people in the back are all spouses or fiances?
There is no "tall" in the Diamond-Maas genes)

I've been putting off writing this post because I knew it would be long, I knew there would be a lot of pictures I wanted to share (which means a lot of time cropping, editing, resizing) and when it comes down to it, I am quite lazy. As proficient as I've become at procrastinating, I finally decided that it could wait no longer, so here goes...

Last weekend was the Second Biennial (which means, as my friend Kristen and my father have pointed out, every two years as opposed to biannual, meaning twice a year) Diamond-Maas Family Reunion. The tradition was started by my spunky little grandma. She's the cutie-patootie white haired lady in purple, if you hadn't guessed. Every other year the host location moves up the family tree. Grandma hosted the inaugural event two years ago in our hometown of Cedar Falls, Iowa. My dad, as the oldest of her children, was next in line so this year it was held in Springfield, Illinois where my parents live. Before I go any further I have to proclaim that the entire weekend was graced by the ABSOLUTE BEST WEATHER ever! Now, I love me a good Phoenix summer and I wouldn't trade Arizona for anything, but the weather in Springfield was perfect! It was the kind where you just wanted to be outside every minute of the day and night. It was low 80's, barely breezy, enough humidity to make my hair curly but not enough to be a bother and just so very comfortable. Then on Sunday evening, the clouds rolled in and you could see the rain and hear the thunder from the storms that passed by but didn't hit us. I loved it all.

The actual event was on Saturday at the Crowne Plaza Hotel. I forgot to take pictures of that portion of the weekend - sorry about that. We had a private meeting room at the hotel for the day. We spent most of the day chatting and catching up with our Iowa and Kansas City relatives. My cousin, Jessi, brought along her fiance, Dave. Dave is awesome - a lot like Pat in many ways. They formed a strong bond over bass fishing. Pat gave him the nickname Poncho (long story) and I think they are now BFFs. A few of my relatives were unable to come for various reasons. Julie (another cousin) and Mike were part of the unlucky Iowans busily trying to wade out from their very-flooded homes. Another cousin was leaving the next day to study abroad in China. Or Japan. His brother is currently studying abroad in Japan. Or China. Between the two of them, they are busing exploring Asia. Hopefully we'll get a full turnout in 2010.

Dinner was a choice of prime rib, chicken or tilapia. Like the good Iowans we are, we all ordered the Prime Rib - rare. However, even though it was specified months before, there wasn't any rare to be had. As the food was served, everyone was surreptitiously eyeing the plates of their neighbors to see if that piece of meat was redder and bloodier than the one on their own plate. I think the server may have thought we were vampires. The one exception was Chris who got the fish. She married into the family so she can't help her abnormalities. We were very nice about this Diamond-Maas family faux pas (seriously though - fish over prime rib???) and didn't even mock her. Much.

Two of my siblings have children, 4 for my brother and 2 for my sister (One of them was asleep during picture taking time if you are confused when counting children in the photo above.) Since we had our own private room, the kids were free to run and play without disturbing other customers. I am ashamed to admit that though they are family, I feel as if I am "other customers". It's no secret that as a generality, I don't like kids - which is precisely why I have chosen not to have any. But this event proved that I also have a very low tolerance level for noise and activity that I am not a part of. This is somewhat counterintuitive since if I am a part of the noise and activity, I love the mayhem (just ask the "other customers" at our extracurricular book club dinners - people actually asked to be moved to a different section of the restaurant because we were so noisy last time. My apologies to those nice quiet-loving folks). Don't get me wrong - I honestly believe that each of my 6 nieces and nephews are awesome, beautiful, intelligent, interesting and funny children. I just prefer to interact with them one at a time, instead of being surrounded by 6 little whooping pint-sized people all at once. By the end of the night my nerves were raw and I couldn't relax. I stayed up reading until the wee hours of the morning in an attempt to calm myself enough for sleep.

We watched videos and photo slide shows. We played a get-to-know you game involving M-n-M's. Overall the event was a success and a good time was had. My dad is to be commended for planning a great party.

The next day everyone came to my parent's house for brunch. It was perfect! Lots of good food - especially my mom's rhubarb cake - mmmm, rhubarb! The plan was to eat, take a group photo and then play some croquet since that's what we used to do all the time at my grandma's when we were kids. However, Pat and Poncho couldn't stay away from the little pond across the street and fishing became the activity of the day. Everyone caught a fish, even me. My nephew, Matt, caught 15 fish (maybe more, I think he was losing count). He's squeamish about touching them, so Jessi sat on the bank and took them off the hook and threw them back in. Matt was such a prolific fisherman that two seconds later she'd be taking another off the line. I am very pleased to report that none of the children got on my nerves the entire day!

Here is Matt looking awfully nervous with the fish he's caught. Every time I tried to take the picture, he'd take a step back away from the fish. 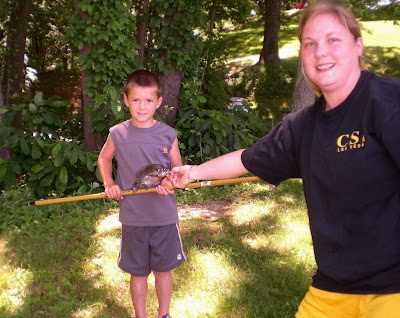 Brett, Matt's dad and my brother, is also afraid of fish. Poncho/Dave was nice enough to take Brett's monster off the line for him and hold it for the photo. Brett wouldn't even touch it. 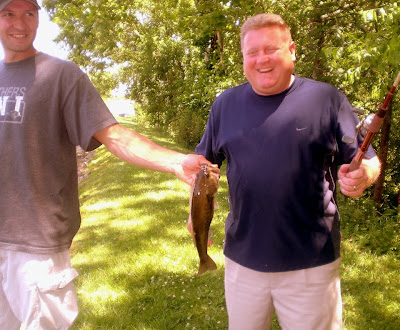 Here are some pictures of my parents' beautiful house. I LOVE this house. Their neighborhood is out in the county (corn fields on two sides of their lot) but they are only 10 minutes from town. They've got a full acre, which would give me plenty of room for my own agility course if I lived there! 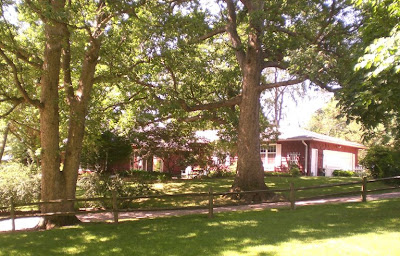 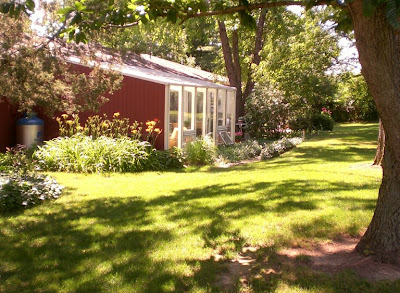 And here are some photos of me and my siblings: 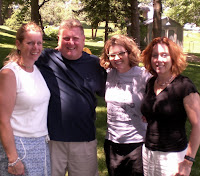 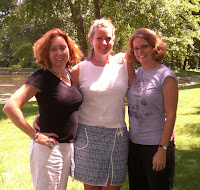 Is that long hair for Ann and short for Amy???

Alas, I could not make this wonderful family celebration - maybe if there had been homemade ice cream and fresh raspberries - I could have been there! I am in for 2010!

Looks like a great time. Especially the making ice cream part. I remember this as a long time tradition during family get-togethers.

I live in California ever since 1976, and I miss my family in a big way. If you're reading this and might possibly be a long lost cousin, get in touch I'd love to do some catchin' up -- paragon3@p3b.com