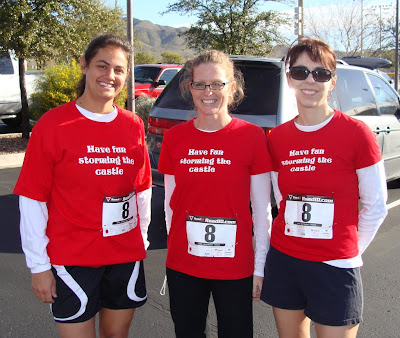 I wouldn't actually call this race an "adventure race" - it was more like the Urban Dare that I did a few months ago with Laura than the other adventure races Irene and I do. It was billed as an urban challenge similar to the Amazing Race. It included 10 challenges, running and biking.

Challenge 1- run around the community park. This was probably about a mile and a half. We got off to a rather slow start here. Irene has been a little busy lately and hasn't had much opportunity for running. A very, very energetic toddler can do that to a person. At the end of the run, we were in second to last place out of 28 teams.

Challenge 2- ride our bikes to the spot on the map designated for the math challenge. Irene earned her way back into super-star status by being the best map-reader ever! At no point during this race did we get lost. However, now it was Christy's turn to slow us down. Apparently a Huffy bike, sized for a 10 year old, with two tires very low on air may not be the best choice of bike for competitive racing. But Christy muscled through and when we arrived at the challenge almost half the teams were still there. The math was a long division and a multiplication problem. The long division was 1,117,285 divided by 13. The multiplication was 756,458 x 26. Irene attacked the division. Christy and I did the multiplication. A very few seconds later our correct answers moved us into the top half of the field. 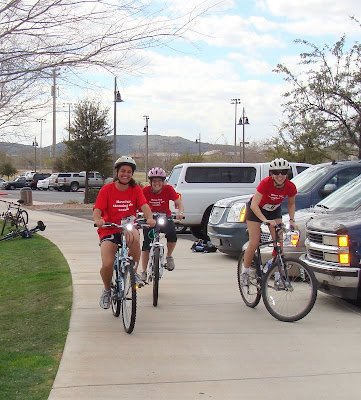 Challenge 3 - Knot challenge. We had to ride to the other end of the park to get a rope which had five knots to untie. Christy and I rocked that one - and passed a few teams in the process - while Irene studied the map for the fastest route back to the transition area.

Challenge 4 - We had to make 3 baskets from various points and no team member could take all 3 shots. Christy made the free throw. I lucked out the jump shot and the lay up. 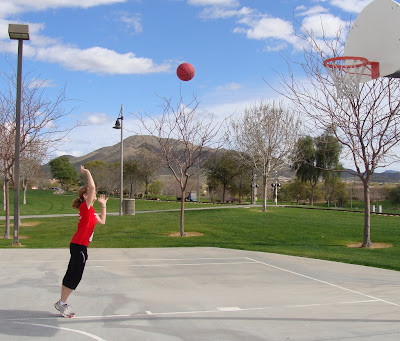 Challenge 5 - Any good Amazing Race knock-off would have a "needle in the haystack" task. This one was to find one penny each hidden in the sand volleyball court. Easier done than said. 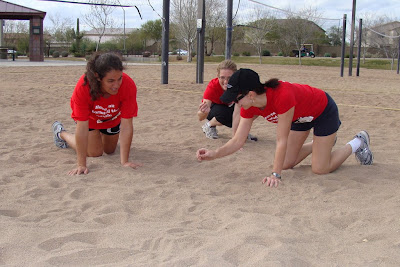 Challenge 6 - Locate the spot on the map where you turn in your old map for a new one. This one was a trick. They hid the clipboards of new maps and the bucket for old maps in the scrub brush and they didn't staff the checkpoint, so there was nothing to direct you to the spot...other than faith in your map. There were about six teams milling around the spot where the checkpoint was supposed to be - all of us crossing paths with each other. Finally we read the fine print in our directions that stated that this checkpoint was not manned and when we stopped looking for AAR staff, we immediately found the bucket. And now it was my turn to slow us down. My chain had come off/stopped working/or something bad that caused my pedals to stop moving. Irene to the rescue...she fixed it pretty quickly, but we still lost ground to a few teams.

Challenge 7 - SOCCER! Yay! Perfect for us. We each had to make a goal, shooting up a hill into a tiny net. Christy didn't make her first shot and for this we mocked her. This is a girl who plays soccer 10-12 times a week! Her initial mistake was that she wasn't really looking at the goal - she just shot quickly. Funny - I used the exact same tactic to make my first shot! Irene made her shot in two and we again passed a few teams.

Challenge 8 - We took our bikes back to the transition area and ran across the park to the Plank Ski. They gave us two planks and we had to use them as balance beams to move from point A to B. When you got on one plank, you had to pick up the previous one, move it to the front and everyone has to walk onto that one without falling off. There was a lot of cheating going on by the other teams so we didn't take this very seriously.

Challenge 9 - We ran a short distance to the golf ball challenge. There were about 40 different golf balls in a bucket (Titlest, Nike, Pinnacle, etc) and a stack of papers. You had to choose a paper and then find the golf ball that matched it. We were looking for a Nike 4. Christy had luck on her side - Nike 4 was the first ball she picked up.

And we were off to the last challenge - a puzzle! YAY!! It was a 100 piece puzzle. If you look closely, you will see that ours happened to be a dog puzzle. :) 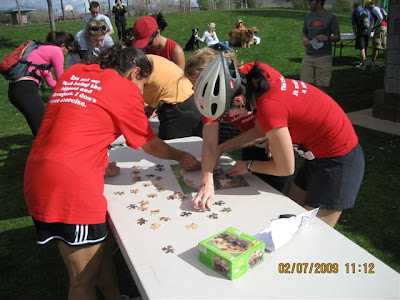 We may be nerds, but all the puzzling we've done lately really came in handy! We finished that puzzle so fast that someone asked us if ours was half put together when we started. :) Another person thought we started early on the puzzle while we sent one person to do checkpoint 9. Brian, who was our cheering section, said that we did the puzzle twice as fast as any other team. 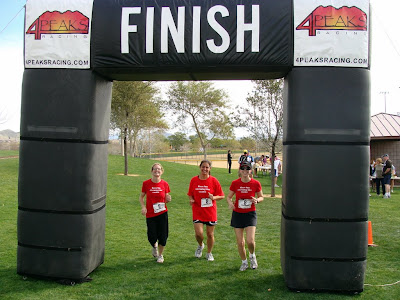 And that is how Storming the Castle went from 27th of 28th to take 5th place overall!! We got 3rd for our division (3 person team) which earned us a prize...a 4 Peaks Racing bobblehead! 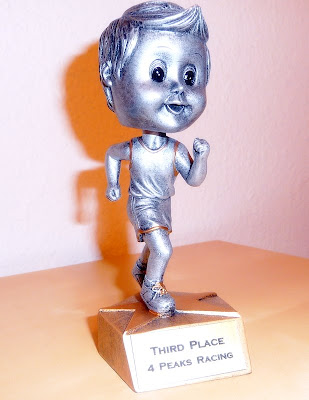 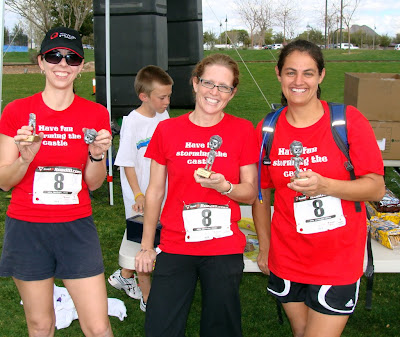 Yes, the head of Irene's bobblehead bobbled right off. As did its arm. :)
Posted by Diamond Girl at 6:00 AM

you are shrinking. i want you to eat lucky charms and ice cream everyday for the next 86 days. love, a mother.

Cool! So I'm NOT the only one who wears a helmet while doing puzzles. Thanks Irene!!

Did I mention, I took a nap and went to Target? You girls rock!

congrats on you long division success! :)