The Adventures of I HATE KAYAKING

I should leave it at that. But since I'm overly verbose and I've given up on reigning that in, I'm going to elaborate. This weekend was the Desert Rage adventure race in Camp Verde - kayaking, mountain biking, trekking and orienteering. I mentioned before that I was nervous about the kayaking portion of the race since I have never piloted a solo-kayak and I've only ever been in a kayak once before. Who signs up for a kayaking race without having done it before? The answer is...stupid people, that's who!! If I had known that the kayak portion of this race was 9 and a half miles (!!) I might have reconsidered this race. But I did not know this and I sent in the check for Storming the Castle and we showed up on Saturday for a day full of torture.

Irene and I went up the night before to camp at the transition area. We got there after dark, unloaded the Element and set about getting ready for the morning. One important task - inflating our kayaks. 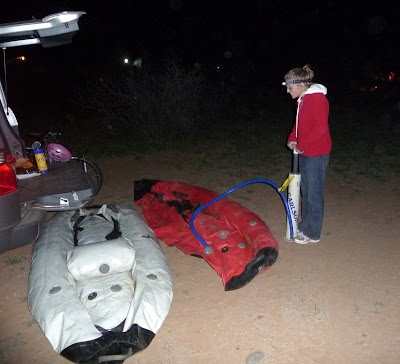 My first time in a solo kayak: 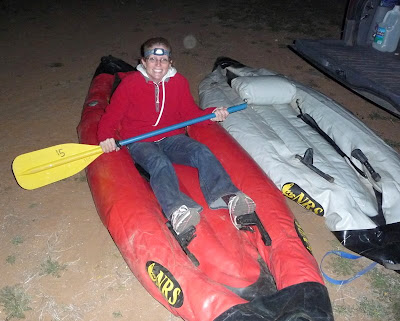 Too bad this didn't actually count as practice! And I only have half the oar. Inexperience shining brighter than my super-cool headlamp!

Brrr! It is cold up north in March. Really cold. As in cold, like all of our water freezing overnight and all of our gear being covered with a thick layer of frost when we woke up, cold. Brrr! We slept in the Element, but it was still so cold, that the sleeping part didn't really happen.

Our torture started at 5:30 a.m. I hate cold. I hate dark and cold even more. I hate dark and cold and the prospect of dumping my kayak into a river of snow-melt. The night before we were told that we could expect to dump at least five times. I was so freaked out! At 6 a.m. we loaded the kayaks and drove them to the boat drop. We were so outclassed and inexperienced - it was humiliating just carrying the kayaks. We talked to a lot of people and every conversation we had just hit home the fact that we were in over our heads. (Just a metaphor there - thankfully the river was so low that drowning was not one of our fears. Just freezing to death.)

I was so nervous I was almost physically ill. I was 75% scared that I'd completely suck at it and 25% scared that I'd tip over. My first fear became reality, but my second didn't. I guess I have that to hold on to. But Holy God, am I terrible at kayaking! You'd think that TWO HOURS AND 40 MINUTES would be enough time for me to get the hang of paddling, back-paddling, turning, etc. But no... I ran full force into the trees with the same lack of skill on the last set of rapids that I did on the first set of rapids. I sucked. This picture was from last year's race. See those low-hanging branches on the right? That is where I would be - facing perpendicular to the shore, every damn time. 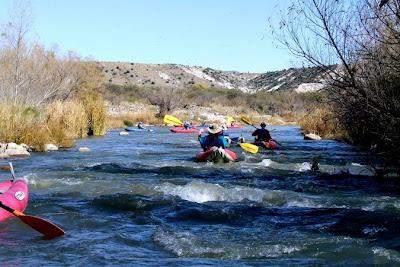 Yes, some of it had to do with the fact that our paddles were way too big for us and that our kayaks were made for stability instead of speed. But there is only so much blame you can place on your equipment before you have to admit that lack of coordination is really the major factor in your utter suckiness! Almost immediately we were all by ourselves, not even in sight of the closest teams. I was so defeated within the first 10 minutes that I would have quit if there had been a way off the river. 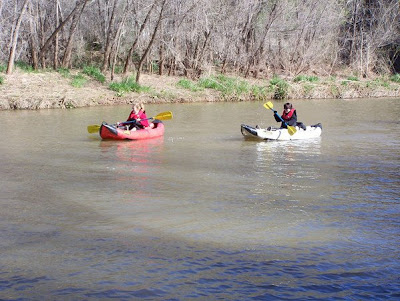 But my only option was to paddle, paddle, (want to cry), paddle, paddle (complain) until it was over. Irene commented that she has never seen me so dejected ever. It was horrible. By the time we finally got out of the river, we were almost an hour behind most of the teams.

After the kayak, I got to do my second least-favorite thing - mountain biking. Why did I sign up for this race?? We rode 4 miles uphill. Ok, I rode maybe 2 miles and walked the bike 2 miles. At this point, it was Irene's turn to feel dejected because her endurance wasn't where she wanted it to be and because she was stressed about the 400 foot steep incline hike we had ahead of us. I was very much looking forward to hiking. At the bike drop, we finally caught up with some other teams...or at least we saw a lot of bikes there so we knew there were other people in the race besides us. That was moderately encouraging.

And then, the hiking was awesome!! The trail took us up a river bed. 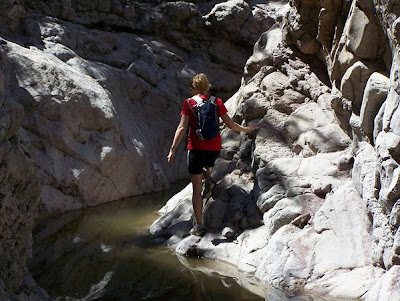 We got to boulder our way up a dry waterfall. 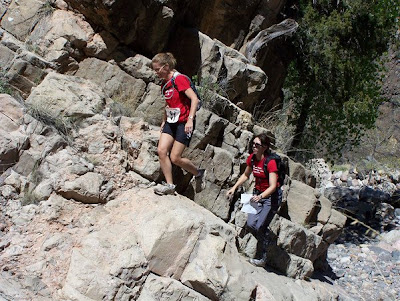 It was beautiful. Poor Irene - the hiking made me so cheerful that she was ready to punch me or maybe shove some Prozac down my throat to control my extreme bi-polarness of the day. She said that I was like Snow White singing to all the little forest creatures. I'm lucky she didn't push me back down the waterfall. :) But really - it was the coolest hike EVER! And we rocked at finding all our checkpoints on the hike, so my mood remained elevated. We even ran into some other teams doing the rec course! We rode our bikes back down the mountain. I actually rode the bike 95% of the way, too. I'm getting better!

We returned to the transition area and were given a new map. We had to find 5 orienteering checkpoints on foot. Irene, as usual, is the goddess of all things map. We finished quickly enough to beat the last place team by a whopping minute and a half! We did NOT come in last - which is what it's all about. (An email from earlier in the week with Irene: There will probably only be 7 or 8 teams in the rec course division. I'm thinking that our track record of not finishing last could be threatened with this low turnout plus my kayak steering shortcomings. Good thing I've been biking and you've been running - we're gonna need to make up ground somewhere! Because really....is this about having fun? NO WAY! Is it about winning? NO WAY! What's it about, then? NOT COMING IN LAST!!)

So, a little tiny woo-hoo for Storming the Castle. We lived through another race! 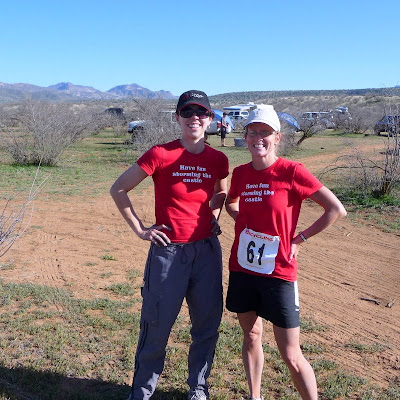