First off...apologies if this post goes somewhat astray. My husband is currently here in the office with me. He's trying to learn to play a No Doubt song on the guitar and the stereo is loud, his amp is loud, he's screaming the wrong lyrics and jumping around. It's a little bit distracting.

But since the computer is a desktop and it's stuck here in the office (er..."studio") and I told Wayne I'd blog about this story tonight, Pat and I are trying to peacefully co-exist. Well, I'm being peaceful. He's being LOUD. To be fair, he was in here first. So, I'm going to get this one done ASAP and leave him alone in his studio. He's already been hinting that I should do that. "Little One, don't you have to go play soccer?" "Aren't you going to walk the dogs??" Of course, I may not ever finish this post if he breaks the light with his head mid-jump, which looks like could happen any second. Men who are well over 6 feet tall need to be careful when jumping in a room whose only means of light comes from the ceiling fan fixture.

Kiri's pet boy Wayne met me for lunch downtown today. I was waiting for him outside my building and I see a lady chasing around an injured sparrow apparently trying to catch it. This is proving difficult for her as she has one hand holding her phone to her ear and the other hand has to keep blocking her purse from falling off her shoulder. Wayne rides up on his bike and I point out the crazy lady. What does she think she's going to do with the bird if she catches it? Put it in her purse and take it to the vet, maybe. I don't know. (Cacophony update - Pat is now on to a Melissa Etheridge song. I believe he at least has the lyrics right on this one, but those can't be the right chords he's hitting on that guitar. He claims to be pretty close, though.)

Crazy Bird Lady sees us watching her and asks for our help. Turns out she wasn't that crazy. Captain Jack isn't broken at all, but rather his wings are all caught up in string. Wayne drops his bike and starts the process of catching the bird. With two hands and no flopping purse, Wayne is able to catch the sparrow pretty quickly. 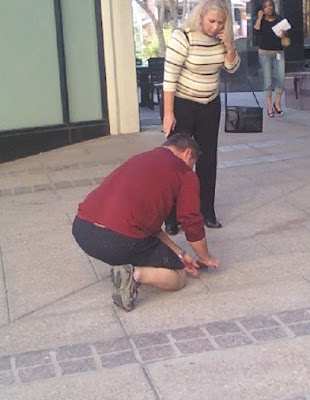 The string is caught up in both wings and both legs. I try to unwind it from his little talons. Captain Jack is pissed - he's biting us with his small but thankfully ineffective beak. The string isn't actually string but bird netting, so unwinding is impossible. 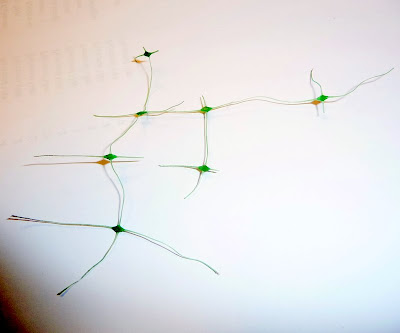 As quick I can, I run into the jewelers to borrow scissors and run back out. Sometimes you just end up running with scissors. Snip, snip, snip. We've got one wing and one foot done. Wayne spreads the wings and we get the other one taken care of. Snip, snip. Captain Jack is free of the net! Hurray!!! We take a quick picture of our little friend before we release him. 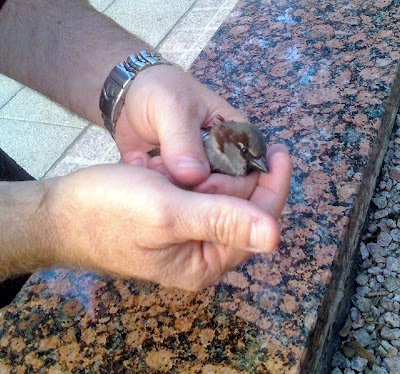 (It would be awfully fitting if I could tell you that Pat is playing Free Bird right now. But he's not.)
Posted by Diamond Girl at 9:53 PM

I am laughing so hard. This is one of your all time bests. You certainly have a flair for storytelling!

Peed my pants- the funniest story ever!!! Wayne didn't tell it 1/2 as well...he forgot details like you NAMED the sparrow....