More and More Stuff About a Cruise Ship

Alternate Post Title: Pat's B-day Cruise, The Finale Episode
Are you sick of hearing about the frickin' cruise? You'll be glad to know that this is it - the last post about the cruise. It's actually four postings in one, but I want to be done blogging about this, so I've combined them into one extra-long post.
PART ONE - Travel Troupe's Competitive Spirit

There are a lot of contests and games on a cruise. We participated in most of them - probably not a surprise as many of my friends share my competitive-to-the-core gene. We won a lot of them, too. As already documented, we won the first Trivia Contest. Woo hoo! The next night our group won the title of Loudest/Rowdiest Team during the trivia game. Look at these nuts! Are you in any way surprised that they won? 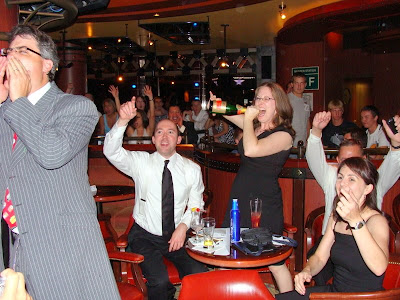 On another night, Brian and Irene were chosen to participate in the Marriage Game, which was a version of the Newlywed game. 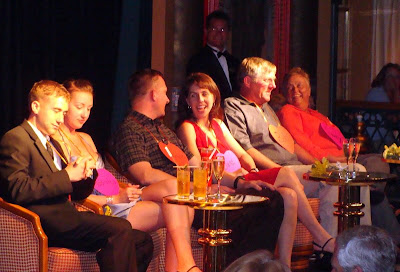 Yet again, Travel Troupers were the victors! 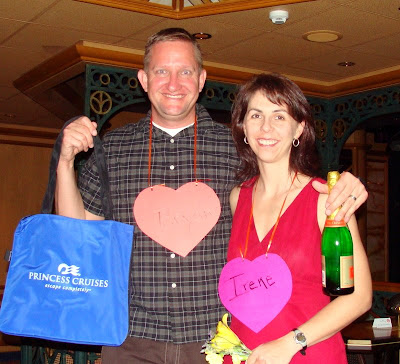 We competed in a bunch of ping pong tournaments and won those, too. Ok, that's a lie. We sucked at them. So we hosted a TTOT (Travel Troupe Only Tournament) to get one of ours into the gold. Way to go, Jamie! 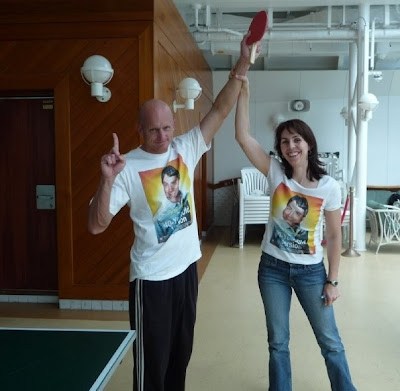 There was a water volleyball, too, but I don't think there were any actual winners announced. I'm pretty sure (with the exception of our 3 players) that the teams were too drunk to even care and I'm definitely sure that the cruise dude was too busy collecting room numbers from bikini-clad co-eds to notice. 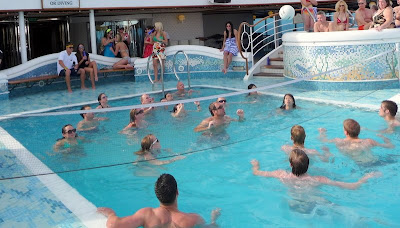 There was also a Wii Mario Kart contest. I sucked at this. 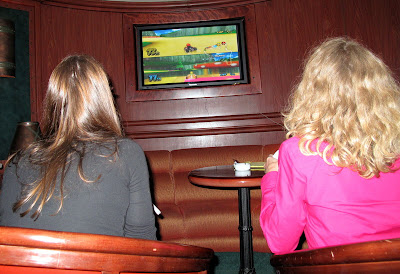 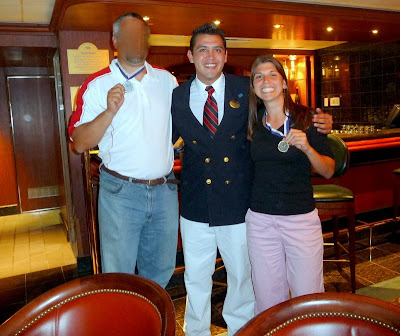 It's not surprising that we played a lot of games while on the cruise. It's what we do. Most vacations include an extra suitcase just for games. This one was no exception. 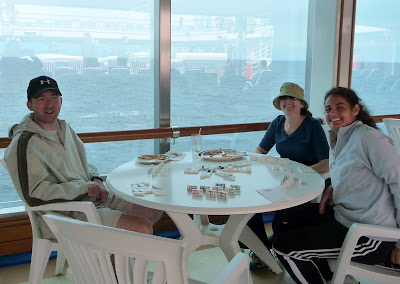 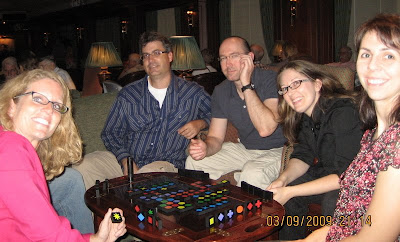 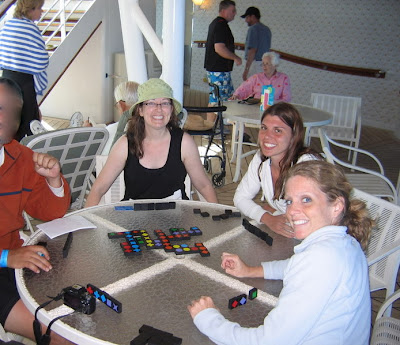 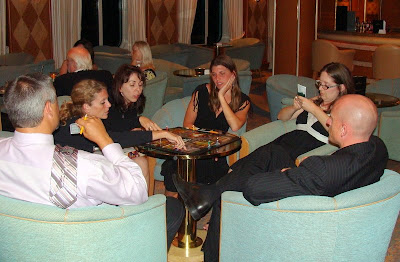 Daytime House on the Hill: 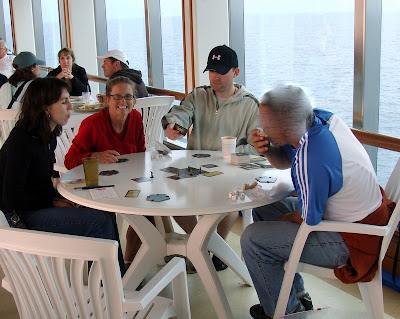 Nighttime House on the Hill: 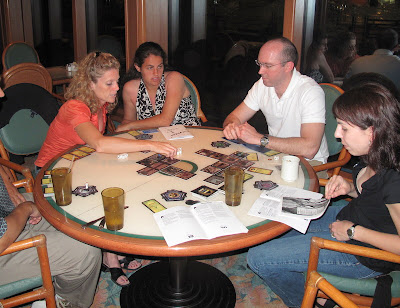 PART THREE - We Clean Up Well

Cruises always host formal nights. I think this is to make packing difficult and to increase the amount of luggage you have to bring. Or maybe because they know that it is kind of fun to dress up. And damn we look good dressed up! 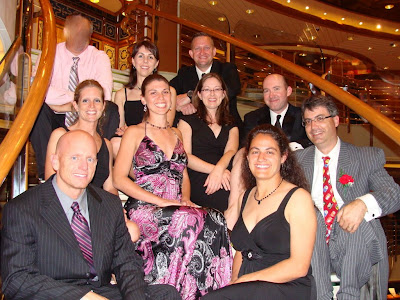 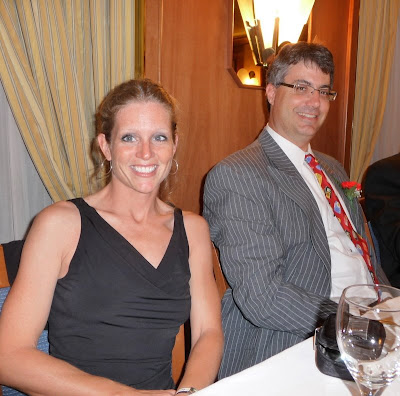 We didn't plan for it to be little black dress night - it just ended up that way. Poor Laura is new to Travel Troupe so she is not yet in the mind meld. 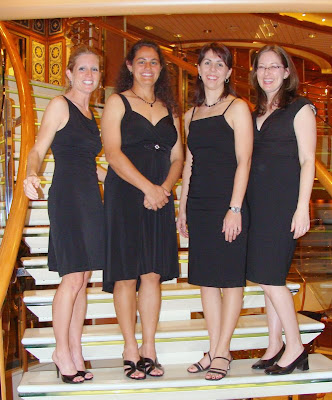 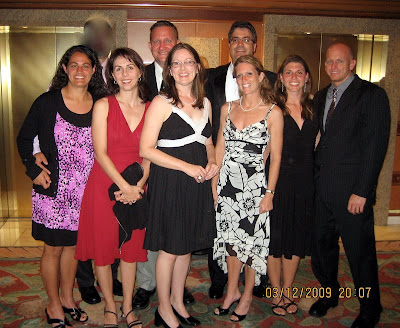 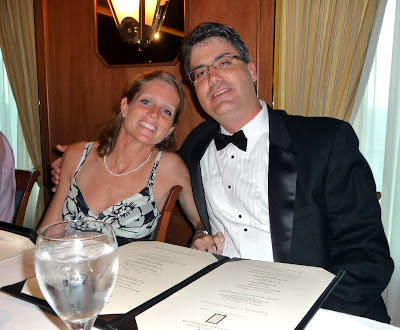 It's a pun. It's funny. Special thanks to Kiri for the shirt idea and the artwork creation. We wore these shirts on the last day at sea. 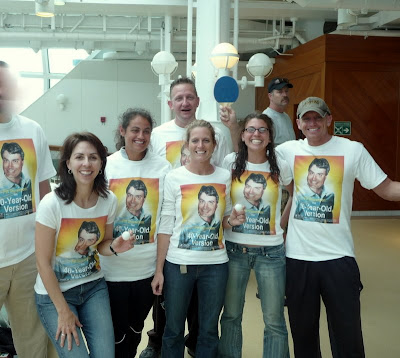 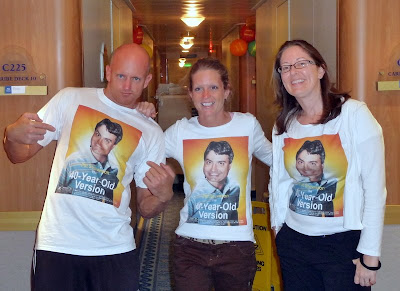 I don't think Pat liked these as much as the "I Heart Pat" ones. Plus he really likes dressing up for dinner, so he wore a suit instead of the Team Pat shirt. 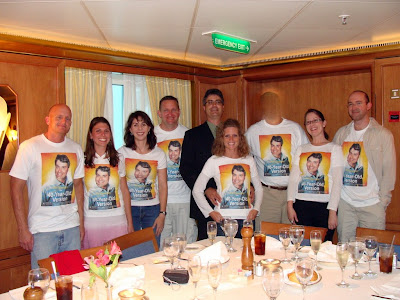 Go Team Pat! (Christy put her shirt in her purse and at the last minute decided she didn't need her purse on the trip. Oops.) 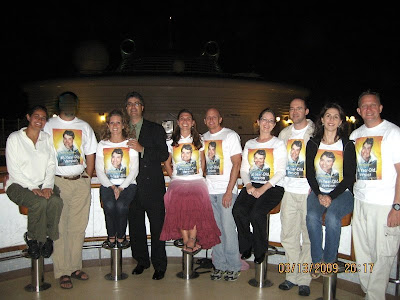 And one final picture from Pat's B-Day Cruise. Pat is such a player! Wooooooo! 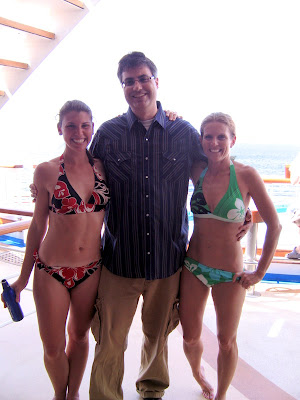 In the picture with pat as a player did you notice how blue the water was?